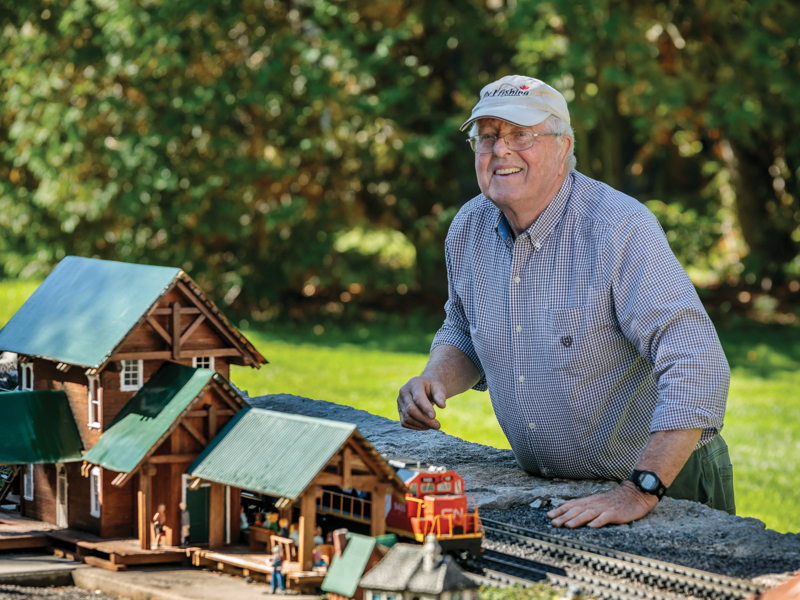 In the distance, the whistle blows, heralding the arrival of the first train of the day. It rumbles past the farm where sheep and cattle graze, crosses the dry gulch, makes a stop at the freight yard, where a No Frills truck is backed into the dock. The train gets underway again and gathers momentum as the diesel locomotive pulls its cars over the curved trestle, the river flowing beneath. It gives a friendly blow of the horn to the ranger holding a baby racoon at the top of a fire tower while his colleague toils away in the office, quietly passes through the village, and after navigating an s-turn, finally appears to cheers and a warm welcome.

Train travel used to be prevalent throughout Prince Edward County, making daily trips from Belleville, delivering mail and passengers, picking up produce for market on the return trip. The railbeds haven’t seen a train in decades, although many are enjoyed as recreation paths. Some are simply abandoned.

Not so with the Evergreen Gardens line, built, owned, and operated by Dave Welsh. Two sets of tracks, with more than 100 pieces of rolling stock, operate almost daily during warm weather, among landscapes, villages, and perfectly manicured gardens. The name – Evergreen Gardens – hints at the impetus but gives little clue to the epic installation.

Dave’s trains, tracks, the buildings, vehicles, people, and creatures trackside are G-scale, typically a 1:29 ratio, with the rolling stock precisely duplicating the original full-scale versions. Even the sound effects are authentic, from the purr of the diesel engines to the chatter between the conductor and engineer.

Dave didn’t plan on building a tourist attraction in his backyard. He just wanted a rock garden, something he always admired as a boy, watching his mother’s passion for gardening, while his father ran the family dairy farm. He thought about adding a water feature, and then his friend and boss John Woodland suggested stocking the pond with koi.

After a lifelong career in the grocery industry, perhaps best known locally as the frozen dairy manager at Picton’s No Frills, Dave’s vision emerged. He began transforming the back yard, collecting rocks from nearby fence rows, initially building modest elevations. In the spring of 2006, he knew the time had come, and the iconic line from his favourite movie, Field of Dreams, resonated in his heart. “If I build it, they will come.”

He did and they have, and visitors, and admittedly Dave and Elly, are surprised by what they find in the Welsh’s backyard. Dave was planning gardens and ponds, and since their charming property rests on the headwaters of Waring Creek, they were ideally situated for both.

A fortuitous trip to a hobby shop in Picton changed everything. “There were these large-scale trains,” recalls Dave. “I’d never seen them before and asked Joe, the owner, what they were for. He told me they were for outdoor use and known as G-scale or garden trains. I hadn’t thought about trains, but the opportunity was there.”

The hook was set.

The rock gardens and ponds are now part of a mountain, built by Dave over the course of more than a decade, adding features here and there, gathering equipment, laying track. Elly says he never plans, he just creates. “It grows organically,” Dave insists. “I work around the trees.”

Dave built his own mountain, in his backyard. From the street, even from the front of the house, there is no hint of the joy awaiting visitors. Behind the garage, the magic appears.

Initially, Dave built a smaller track with more modest elevations, which he ran for about three years, while imagining a much larger project. The second track, and it’s stunning setting, took some work. Dave moved in 250 tons of stone soil. There are 9.5 tons of rock in one corner alone. He thought about adding more height but stopped with a viewing platform at 18 feet.

He reinstalled the first track, added a second, and although they do not intersect, there is an illusion of that, and both are perfectly level. “That the key to success,” Dave explains. “Mine have zero grade.”

In 2012, he built a 40 by 14-foot barn where the trains sleep at night, in bad weather, and in the winter. Including the mountain and the barn, he laid 1,200 feet of brass track, creating two distinct lines. The barn has eight sidings about 30 feet long, four for each track. It also houses the electrical supply for the trains and track, and Dave’s assortment of rolling stock.

The mountain is accessible, offers walking paths, a picnic area, and viewing platforms. There are streams and gullies, which of course require trestles – two of them, 35 and 40 feet long, all built faithfully to that 1:29 scale.

Finding G-scale trains is a challenge. Because of its size, it is not readily available. Most train enthusiasts collect the more popular HO and N-scale. The G-scale is the largest, before getting into a rider, and requires considerable outdoor space. Dave credits Doug Kingsmill of Kings Hollow Garden Trains in Castleton for his tireless assistance with rolling stock, electronics, and advice.

As a hobby, it is becoming more expensive. “The cost of raw materials has increased, and the price of equipment is probably 400 to 500 per cent higher than when I started.”

In the early days, Dave had help building his collection with what he thought was a nice lottery win. He checked his ticket at the local store and thought he’d won $10,000. Turns out he missed a zero and the prize was $100,000. “Of course, I didn’t put it all into trains,” he claims, accompanied by an epic eyeroll from Elly.

With 10 locomotives and more than 90 freight, box, flatbed, and tanker cars, Dave is grateful for a network of enthusiasts who point him in the right direction. “There are not many second-hand G-scale pieces available, but if you know where to look, you can usually find them in good condition. Today, a new engine with sound and remote capability is about $1,500 and freight cars are $150 to $200. A passenger car runs about $500.”

The locomotives are 21 to 31 inches long, seven inches high, and 4.25 inches wide. They run on brass track, electrically powered by 24 volts, and controlled by a remote, which works speed, direction, and up to 100 unique sounds, including a horn. Dave’s engines are all exact scale replicas of real trains, with great attention to detail. Phoenix Sound Systems sends technicians to rail yards to record the actual sounds of the train. The whistles and horns on Dave’s Dash 9 and GP38-2 locomotives are exact.

“There’s a conductor who gives the all aboard call, there is chatter between him and the engineer, a bell, horn, whistle, and hundreds of available sounds,” explains Dave. “Doug Kingsmill helps me a lot with the technical details.”

The collection includes one passenger car, and Dave admits to some bias. “The two Molson Canadian cars and of course the Evergreen sea container are my favourites. I don’t have a plan when I go to a show or a store. I just see it and like it. Maybe it’s the colour or the name or the wording – I know when it belongs here.”

He combs flea markets, thrift shops, and train and garden shows for buildings, figurines, track, and used cars, looking for the right scale. Dave built many of the buildings and accessories and designed and laid all the track. He constructed the trestles and tunnels, again to scale, and it is constantly evolving.

Dave and Elly have lived on the property for almost 25 years, and it has been in Elly’s family for generations. They severed off several acres from the Pickering family farm, raised their children, and now greet guests from around the world.

They welcomed 86 members of the Picton Model Train Club, photo groups, and garden and horticultural clubs. One of Dave’s favourite stories involves a visit from a Toronto area horticultural society. About 100 people came by bus and toured half a dozen gardens in the area. Dave recalls five or six men sitting on the back of the bus. “We were the last stop, and this was the only place the guys got off the bus,” he smiles.

“We have something for everyone – flowers, trains, fish, tranquility, and it’s always evolving. I’ll get a new inspiration and off I go. I have a village, a church with a graveyard behind a picket fence, a hearse with a casket. I need a bride and groom for the front door of the chapel.”

He has grain elevators, train stations, moose, elk, 11 bears, and of course a No Frills truck backed up to a loading dock.

Kids come for scavenger hunts; adults come from afar. To date, more than 3,000 people have visited, representing every province and territory in Canada and countries around the world. Dave and Elly cherish the signed guest books, with addresses from Russia, Australia, New Zealand, China, most European and South American countries, and of course the United States. Dave particularly enjoys visits from railroad professionals who share their stories and the history of the locomotives they have commanded. “It’s an education to me, too, and the camaraderie of the railroad community is fascinating.”

Each season brings new designs and a lot of work. Dave starts cleaning his gardens as soon as the weather allows, and is usually open from May to October, by appointment only. Once the gardens are clear, he inspects and tests the track, then starts setting out his buildings (more than 40 and growing), and the figurines.

The trains don’t run in the rain, but Dave likes to operate them after dark, adding a new element to the experience, and inspiring other enthusiasts to do the same.

“The hobby never ends,” Dave admits. “Without it, I would have gone back to work after retiring in 2012 or gone mad. Maybe this is madness, but we enjoy it, and get as much pleasure out of sharing it as building it.”

Evergreen Gardens Outdoor G Scale Railroad welcomes visitors by appointment only. There is ample room for physical distancing. There is no admission, but donations are warmly accepted. This joyous display is located just south of the roundabout in Picton.