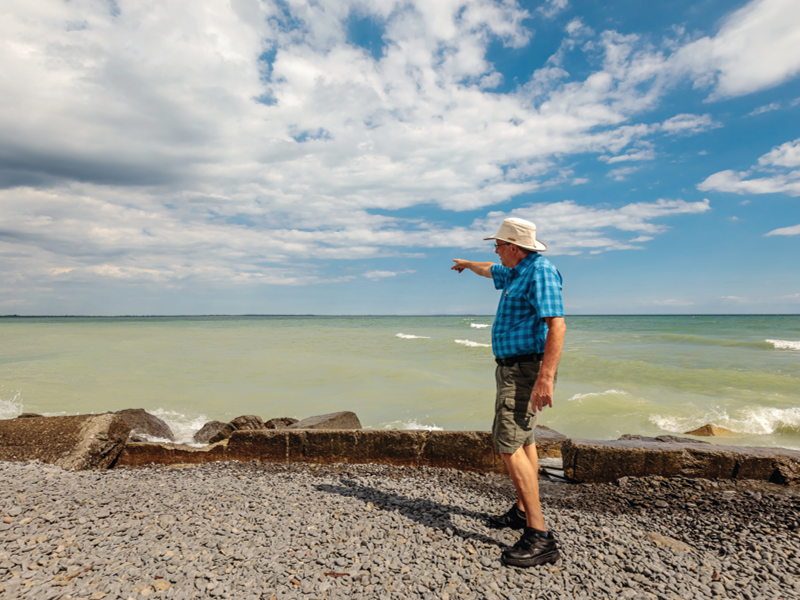 The 1804 shipwreck remains controversial and captivating

The name HMS Speedy is familiar to residents of the County and the Bay of Quinte region. This is partly because the ship disappeared off Presqu’ile Point in 1804, as is clearly described on the historical plaque on the shore. However, more folks may recall the exploration work done by Belleville resident Ed Burtt in the early 1990s. Ed used his underwater exploration and salvage company, Ocean Scan Systems, along with his extensive diving experience, to locate artifacts on the lake floor he felt were from a very old shipwreck. Ed told everyone that he was 99.99 per cent sure he had found the remains of the Speedy.

Many disregarded his attempts to promote the Speedy project as the rantings of a treasure hunter. A prickly disposition did not help matters, especially in discussions with the Ontario ministry that managed archaeology survey licences. Ed kept his knowledge close to the chest, doling it out as he felt it might benefit his project. As a result, rumours and theories abounded. Unfortunately, Ed passed away in the fall of 2017, leaving more questions than answers.

A year after Ed’s death, his long-time companion called me and said she had a box of Ed’s documents she thought I might like to see. Soon, the box was on my table, gifted to me with the hope the narrative might be shared in a reasonable way. On that day, the Speedy story became my next book project.

The story of the loss of HMS Speedy has been written about in newspapers and magazines for more than a century, often enhanced with dramatic touches to serve the readership. An excellent historical account was published in 1992, called Speedy Justice, concentrating on the murder of John Sharp and all the legal machinations involved. This was published just as Ed was wrapping up his survey work, so the author knew nothing about the possible findings in the lake.

Ed’s documents were a challenge, but information found there allows me to explain why Ed was 99.99 per cent sure he had found the remains of the Speedy. It also allows us to understand a little better why nothing has happened as a result of Ed’s work. The big question remains: Are the artifacts Ed found actually remains of HMS Speedy? That question may never be answered, but at least we know more about the status of the story.

As a historian, I have always been fascinated with the development of Upper Canada, especially in the earliest years when international geo-politics determined policies in wilderness colonies. A decade after the end of the war between Britain and the New England colonies, York was selected as the capital of Upper Canada and refugees from the war, many called United Empire Loyalists, took up lots along the shore of Lake Ontario. By 1804 the Mississauga people who had been in the Lake Scugog area for generations were gradually being displaced into the interior, many moving of their own accord, anxious to avoid these dangerous newcomers who destroyed forests and killed the animals. Tensions were rising.

At York, Lieutenant Governor Peter Hunter knew he must maintain a delicate balance. His bosses in London insisted he encourage more settlers to come to Upper Canada to build up a population of strong young men who could carry muskets in the next fight against the Americans. Everybody knew it was going to happen, just not exactly when. On the other hand, he must also maintain cordial relations with the various Indigenous peoples in the area, so they would be willing to fight as allies once again, when the Americans attacked. All other considerations were secondary.

In the middle of this, an English trader named John Sharp was murdered at a trading post on Lake Scugog. The perp was a Mississauga man named Ogetonicut who was proud to gain restitution for his family in light of the death of his brother a year before. His cultural training left him no alternative. His chief, Wabbekisheco, also had little choice. He must hand Ogetonicut over to the authorities or risk red-coated soldiers in the camps of his people. A tough choice, but dictated by the times.

Chief Justice Henry Allcock was anxious to get out of the muddy village of York and find a more lucrative position in England. Before leaving, however, he responded to the arrest of Ogetonicut with a bit of creative legal advice, which sent a surveyor to the Lake Scugog region to confirm the location of the murder had been in Newcastle District. This meant the murder trial would be held at Newcastle, on Presqu’ile Point, far from the volatile situation at York. Out of sight, out of mind was the idea.

This is what sent HMS Speedy from York Harbour to the town of Newcastle on Presqu’ile Point with 20 souls on board, all to perish in a terrible storm. On board was Captain Thomas Paxton, a respected and skilled sailor who worked hard to protect his growing family in Kingston but could not avoid speaking his mind to authorities, which could get a man into trouble in colonial times.

Solicitor General Robert Gray was accompanied on the Speedy by his servant, Simon Baker, part of a slave family that had served the Gray’s for several generations. Gray would write a will before leaving on the Speedy, stipulating that all his slaves be freed in the event of his death. Of course, this altruistic step was countered by the continued buying and selling of slaves at York until the practice was outlawed by the British in the 1830s. In 1804, Upper Canada was made up of forward thinkers along with strong proponents of the old ways. If effect, it was like any other society at any other time in human history.

The surveyor, John Stegmann, was on the Speedy, albeit reluctantly. He must testify at the trial, but hated large ships ever since almost losing his life in a fleet of ships caught in a hurricane travelling from New York to Nova Scotia at the end of the War. He managed to survive, but hundreds of his fellow Hessian soldiers did not. When he had the choice, he would much rather walk.

Down at Newcastle, Charles Selleck and George Gibson gazed into the storm on the night the Speedy was supposed to arrive. They had built a new wharf the previous year, to go with the new courthouse and jail by the bay shore of Presqu’ile Point, just west of Salt Point. They built a beacon fire on the east side of Salt Point and watched all night, but the Speedy did not arrive.

The loss of HMS Speedy and the 20 souls on board was a terrible disaster for the town of York and Upper Canada. York had about 450 people at that time, and the loss of 20 travellers all at once was the largest death count in decades. Besides the numbers, they lost a solicitor general, a judge, two lawyers, and members of the House of Assembly. The terrible news shook the communities up and down Upper Canada. Everybody knew somebody who was lost on the Speedy.

One important change happened directly as a result of the loss of the Speedy. The status of county town was taken away from Newcastle due to its difficult location so far east in the district. In two years, a new courthouse and jail would be built at Amherst, in the north-west part of today’s Cobourg, which is why it is now the county seat of Northumberland County.

The town of Newcastle faired less well after the change. Property lost value and the town became a backwater. In the 1820s it moved across Presqu’ile Bay to Freeman’s Point and would later be named Gosport. Folks around Brighton grumbled for decades how the wealthy forces to the west had deliberately ruined Brighton’s prospects, a claim that does not stand up to the facts, which suggest a much more practical reality.

We will never know exactly what happened to the Speedy on that stormy night in October 1804. All we can do is gather as much pertinent information as we can and treat it objectively, building a scenario that seems likely based on the information. Some may choose not to believe the Speedy smashed into a rock just below the surface and ripped apart in seconds. Ed Burtt developed this theory based on the well-known story of the pinnacle rock in Brighton historical writings. He reverse-engineered the events of that night to explain how all those jagged and broken pieces of hull and decking could end up as he found them in the early 1990s.

It made perfect sense to him.

Editor’s note: Dan Buchanan, known as Brighton’s History Guy, is a writer, genealogist, historian, and gifted public speaker. His www.treesbydan.com is used worldwide by family historians looking for their Brighton ancestors. His books include HMS Speedy: The Tragedy That Shook Upper Canada, published August 2020, Murder in the Family: The Dr. King Story, and 38 Hours to Montreal: William Weller and the Governor General’s Race of 1840. Dan was a contributor to Florence Chatten’s Brighton Township, and provides ongoing historical support to the Brighton Digital Archives and the Northumberland County Archives.