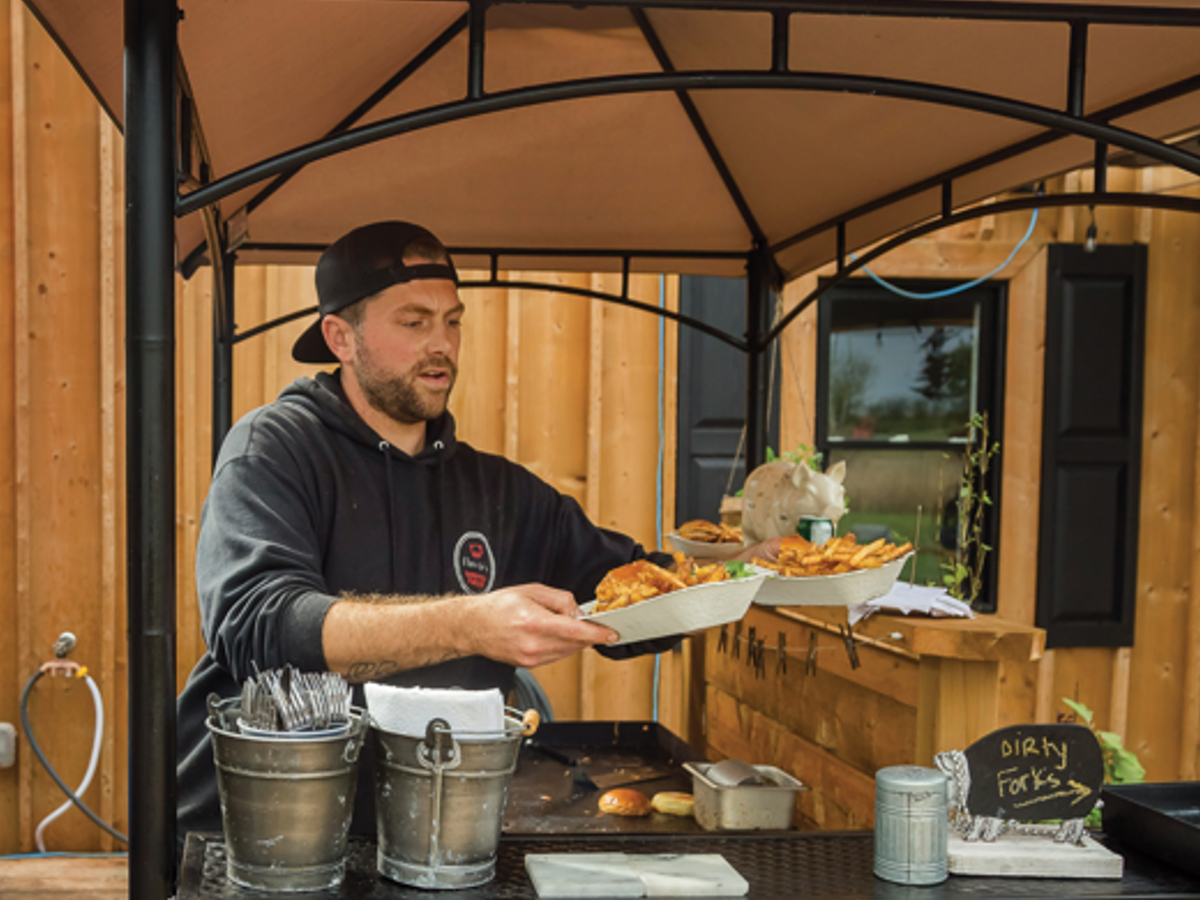 The little boy loved going to Di Rienzo Deli in Ottawa. He’d get to pick his own bread and tell the man behind the counter what he wanted on it, just like the grown ups did. Whatever he chose for the inside, the little boy remembers most of all the bread, that freedom to choose, the way he could invent anything he wanted, all wrapped in that pillow.

Those trips to Di Rienzo changed Kyle Jones’ life, as did growing up in an Italian neighbourhood in Ottawa. “We weren’t Italian, but all my friends were, and I’d hang out in their backyards, fascinated as their parents and grandparents tended gardens. It didn’t matter how big or small the backyard, everyone had a vegetable garden, and the harvests were sumptuous. To this day, eggplant parmesan is my favourite sandwich.”

Kyle’s love of sandwiches never left him. Not when he moved to Toronto and managed a start up financial services company. Particularly not during those crazy six years of working around the clock. “We lived in the Junction and fell into the job. We experienced incredible growth, but I was working 24/7 and I was exhausted.”

Nelda, Kyle’s wife, challenged him. “She asked me if I was going to work this hard, why wasn’t I doing it for my dream instead of working for someone else. That was a really good question.”

By then, Kyle and Nelda wanted a change. They were tired of the convenience and noise of the city and were homesteaders at heart. They wanted to raise their kids and let them play in the dirt, get their hands grubby, understand where food comes from. “When Jack was born, Nelda asked me if I wanted to look back with regret or live my dream.”

Kyle always wanted a sandwich shop. He loved watching his father cook and although he says the only thing his grandmother can make is a reservation, he named the business in her honour. “She and my Dad had such fun in the kitchen. I wanted that vibe for the business.”

Nelda was raised as a progressive German Mennonite. Both sets of grandparents migrated to Mexico to enjoy religious freedom, and her parents were born there. The families were true homesteaders, growing their food, milking their cow, sharing what they needed as a community.

Kyle mentions Nelda often in his journey from a tech start up manager to a sandwich king. They met when she was Kyle’s bartender. “I don’t drink now, but I’m happy I did then. I just kept going to the bar because I had a crush on her.” His eyes light up when he speaks of Nelda, their two-year-old son Jack, and another son due in mid-June. Nelda attended fashion school, lived in England, built theatre sets, and is now a silversmith. Kyle says she has a great entrepreneurial spirit with a lot of common sense.

“Without Nelda, I’d be living in the trailer eating unsold sandwiches,” he laughs.

He accepted her challenge, and they began to plan for the next step. On a trip to Ottawa, they detoured to Prince Edward County. Nelda knew of it’s thriving art scene, but they hadn’t visited yet. Driving through Bloomfield, Nelda told Kyle to stop. “We have to live her,” she declared.

Flossie’s Sandwich Parlour had a home.

They brought their food truck, their son, their dream to Prince Edward County, settling on almost 10 acres on Salem Road, and began understanding the quirks of the County, learning the business of running a food truck, and discovering the resources surrounding their new home.

They found they couldn’t park a food truck just anywhere and start selling sandwiches, according to County bylaws. No problem, they’d change their business model to farmers markets, festivals, and public and private events.

Help came from everywhere. Kyle met Angelo Bean and learned of his 12-year-old prosciutto made from heritage Berkshire pigs. Although hesitant, he accepted an offer from Rod Hadath to try water buffalo. “It’s beautiful! There’s a sweetness to it and it has so many layers. It’s a staple on our menu now.”

Kyle sources Red Devon beef from Opoma Farms in Wooler, chicken from Prinzen Farms in Carrying Place, and produce from Mayfair Farm in Cherry Valley and Blue Wheelbarrow in Bloomfield. He ventures to a butcher in Tweed for pork. “I like the way he handles it,” Kyle explains.

He learned everyone has a connection to someone, and the County food and beverage scene is circuitous. “We’re across the road from Gillingham Brewery. They send their spent grains to Hops and Heifers, Rod feeds it to the water buffalo, and we use it at Flossie’s. It’s like marinating from the inside out. We make ale aioli and onions. We’re inspired by our neighbours.”

Kyle laughs at his learning curve. “Not knowing what to do creates so many opportunities.”

He had fun inventing names for his sandwiches, loved sourcing ingredients, and inventing a menu from scratch, and was ready for his opening day of business. Flossie’s was to debut at the Wellington Farmers Market in five days. Except Kyle forgot the bread. It wasn’t that he didn’t have enough, he hadn’t planned for bread. “Sort of a key element in a sandwich, isn’t it?” he noted.

Scrambling, Kyle dropped into the Wellington Bakery and presented his dilemma. He met Joe, who it turns out was from Ottawa and used to run the Richmond Bakery, and had some sandwich experience. Joe used to supply Di Rienzo Deli, where that little boy first fell in love with sandwiches. “The baker who made the bread for my favourite sandwiches is now baking bread for my food truck. That’s pretty cool. I owe so much to Joe.”

Those first two seasons were busy. There were markets and festivals and private events and demand was increasing. Kyle took Flossie’s on the road, doing kitchen takeovers at the Vic Café, Parsons Brewing, and Midtown Brewing. “We’d give their staff a break; we’d do the food and they’d handle the alcohol sales. It was a lot of fun. We met great people who encouraged us, we were inspired by the challenge, and it was tremendous exposure.”

Kyle did a week at Belleville’s Brake Room, thankful for the chance to meet Adam and Laura Tilley, whom he credits for providing a platform for local entrepreneurs.

Although he was grateful for the exposure, Kyle had a sense the tail was wagging the dog. “I was so thrilled with the response to my cooking, and overwhelmed by the demand, and I kept saying yes to everything. I was back to exhausted, although it was different because it was my own business. We decided to dial in on the food truck. We have a 12-week window and I felt pulled away from the truck. I was missing it. I love smoking bacon and brining and curing peameal and making sausage. I missed that activity and connection.”

Opportunity knocked. “One of the pop ups was at Broken Stone Winery, and that’s where we met Carson. He and Kevin came in for sandwiches. The chefs who catered their wedding knew me and when Carson mentioned he wanted a food truck for Carson’s Garden + Market, they suggested Flossie’s. Carson remembered the event at Broken Stone, loved the food, and a year later, here we are.”

Carson Arthur, HGTV star, and Canada’s gardening, landscaping, and outdoor living guru, knew it was a perfect complement for his new enterprise at 1317 Wilson Road. His market offers a beautifully curated selection catering to home chefs and gardeners, all set in a charmingly rustic space. He needed a food element. Always ready with an endless smile, Carson wanted someone who shared his joy and passion for life to augment the business.

“Kyle was an obvious choice to join us at the store,” Carson shares. “Not only is his food top notch, his smile and easy-going manner are infectious. People want to be around other happy people, and its obvious he loves what he does. Kyle’s joy translates into his food and it continues on through his happy customers.”

Kyle still can’t believe his good fortune. “Carson built the patio for the food component of his dream and we’re so proud to be part of it.”

Dropping anchor at Carson’s brought Kyle back to his roots. He prepares everything from scratch, onsite. He has a generous herb and vegetable garden adjacent to the truck, he has his smokers and grills, and he has peace-of-mind.

“I took an introductory culinary course at George Brown College before I bought the truck, and I loved it, but it wasn’t for me. I’m not seeking a Michelin star. I just want people to enjoy their food, and I love the process. Everything doesn’t always work out the way I intended, but I’ve made some delicious mistakes. We give it our best shot, have fun, and invent.”

There are long days, and as the season gets underway – Kyle is thankful he is considered an essential service – there seems to be no end of work once he gets home. “If I’m dragging my feet after a long day, and it’s 11 at night and I have three hours of cooking to prep for the next day, I’ll remind myself I don’t have to do it. I’m my own boss. I can quit anytime. Then I turn on the music and dig in because I’m living my dream. It’s shocking to have this attention. I’m just making sandwiches.”