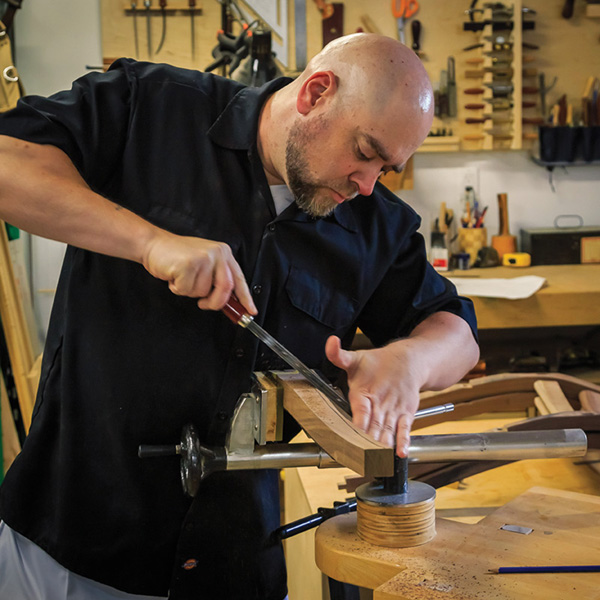 Winning a Furniture Design Battle:  Junior Brake and the Minerva

Craig “Junior” Brake was like the proud father of a newborn child in late October 2019 when he stood before family and friends and unveiled a chair he had designed and built over the previous eight years. He calls the chair design Minerva, after the Roman goddess of craftsmanship and strategic warfare. “I think it’s kind of funny they put those two themes together, but it makes sense because this chair required strategy. It really did. It definitely fought back.”

The look on Junior’s face as he sat in his chair for the first time was one of supreme happiness and satisfaction: The winner of the craftsmanship battle.

The journey to the unveiling of the Minerva chair dates to 2008, when Junior was forced to take a medical retirement from the Canadian Forces. His military specialty was avionics, but his back and neck injuries caused physical limitations and a lot of pain, so his options for similar employment as a civilian were limited.

Growing up in Newfoundland, Junior recalls his grandfather making furniture. It was a hobby Junior took up in his formative years. At the time of his military retirement, Junior was living in British Columbia. With some retraining funds from the military, he returned to school to study woodworking. He found a highly reputable woodworking school in B.C. and applied. “They said I needed a bit more of a portfolio, but I could get in if I made it before the date, so I did some training with Ron David, who was a master furniture maker.”

In the one-year gap between his retirement and the start of his course at the woodworking school, Junior attended a rehabilitation clinic for his injuries. He still has residual physical challenges today, but he notes he would never have been able to go back to school without the rehab clinic’s support.

“Before I went to woodworking school, I was very much drawn to English furniture – Queen Anne – highly carved and decorated. I thought that was the epitome of the craft. After going to school, I realized I respected designs that were much more pared down, simpler, with clean lines and curves. It really shaped my design style to what it is now.”

Junior says most people describe his furniture design style as Danish modern. “My chair was recently compared to work by Guglielmo Ulrich. He was born in Italy to a Danish family. I’m just now finding out about this guy. There are definitely comparisons to be made there. His work was in the ’40s and ’50s, so it’s long past, but I wonder how much similar reading we have done as we progressed because we ended up kind of at the same place.”

Another influence on Junior’s furniture designs is his own physical limitations. During woodworking school, he ordered a special stool for enhanced back support when working on projects. His first design at school was a chair that would be comfortable for him to sit in at the time. “Because I had that limitation to work around, everything I build has spun off from that design focus.”

“The body is not flat and square, yet much of the mass-produced furniture today is designed around the production method of running flat sheets of plywood or flat material through a table saw, cutting square joints, then trying to make it fit the human body. I approach it from the other way; the human body is dictating what I need to produce, and I have to figure out how to get there. The production method comes very, very far down the process.”

Back to the Minerva. The first sketches for this chair were done in 2011. Junior says it was initially all about the woven seat. He recalls telling his woodworking instructors he envisioned a chair with a three-dimensional woven seat, and they shut him down, saying it couldn’t be done.

He said, “I’m going to crack this, which I did. I graduated in 2009. In 2011, I had it. I did some sketches for this chair, but I was in the middle of a move from Victoria, B.C. to Gander, Newfoundland.” Junior wouldn’t have his shop set up for another year.

“I started playing around with the leg shape. I was initially thinking, to do these curves, I had to do a bent lamination, so I cut some and decided to taper them. I put them into the jig upside-down, so the taper ended up being the wrong way. I basically made the leg upside-down. I took it out of the jig and looked at it. It was obviously a mistake, but I really liked it. It was better than what I had planned. It accentuated the curve a bit more. I dialled that leg in a bit more and then I realized the joinery it would take to put these curves together was just crazy. I played with it a bit. It was a brick wall; I couldn’t figure it out. I put it away, then I moved shops again, this time to Ontario. When I first got here, I took out the chair again. This was my third or fourth time by this point – trying to get this design hashed out. I figured out some points of it, but the joinery was still a big sticking point.”

Fast forward to 2019. Junior had been continuing with woodworking projects, but focusing on commission work, creating and building furniture based on the design requests of clients. When his aunt passed away in early 2019, Junior was going through some old family photos and came across pictures of a part being steam-bent in place on a boat. He had a revelation. “That was the missing piece of the puzzle. It became viable to produce it. Up until then, with the bent lamination and complex joints, it would have been six weeks or more per chair to produce. With the steam bending technique and with all this joinery figured out, all the pieces finally came together.”

Junior selected walnut for the Minerva because he hadn’t worked with it previously. Most of his commission work involved ash, maple, and a few other specialty hardwoods. Often, the type of wood contributes to the designs of his commissioned pieces with their unique natural patterns. Junior decided the Minerva’s curves already provided enough movement and interest, so patterned wood would be too distracting.

The bamboo cord seat is beautiful in its design and highly supportive. With the multiple curves of the chair design, the weaving required a non-traditional approach. “Typically, you start at one corner and work your way across. With this, the weaving is started from the centre. You have to be able to keep a lot of numbers in your head.”

With his commission work, customers enjoy Junior’s creations in their homes, but they’ll never be publicly viewed. In contrast, the Minerva and a couple of other pieces Junior has in the works will be his primary focus for the next while.

“Somebody asked me just recently if I was still doing the woodworking thing. I was so insulted. This is all I do, but because I’m not on social media, they assumed I disappeared. I had to really soul search and decide if I want to do commission work forever or do my own thing. That was one of the catalysts to start producing my own designs.”

“The Minerva became an obsession because it was something I couldn’t crack. I’m quite happy to produce these for a little while. I’m planning to do a limited production run of 30 this year. I want to see if they sell. If they don’t, I’ll have a really big dining set!”

Given that Junior is producing his chair by hand one at a time, he is continually tweaking the design. “The chair has a very sculptural quality, so it almost guarantees no two will ever be the same. They’re always going to have different wood grain pattern, which makes me happy. I don’t like things that are too perfect. Perfect and uniform doesn’t exist in nature. If it’s perfect, you start looking for a Made in China sticker.”

Junior is happy with his life in Belleville. He has a supportive life partner and a large network of friends, plus access to resources like the Kingston Pain Clinic, a chiropractor, and an acupuncturist for his ongoing physical challenges.

Junior works hard at his physical fitness and health regimes to help keep his pain in check and retain mobility. “The injuries are never going away. I’ve managed to mask them quite well, but they’re there. There’s still a pain management regime I have to follow and there are still some severe limitations I have to live with.”

Unfortunately, another effect of his military career is Post-Traumatic Stress Disorder (PTSD). Junior is convinced the best things for PTSD are a pet dog and a creative outlet. His dog, Duke, keeps Junior focused on getting outside and moving. The creative outlet – his woodworking – gives him puzzles to solve.

“PTSD – a lot of it – is uncontrolled thought. Your mind goes places it couldn’t quite reconcile and going there uncontrolled, but if your mind is working on a different problem, it doesn’t wander as far.”

Junior will have no end of creative work to keep him focused. He has accumulated 10 years of furniture design sketches, including many fully fleshed-out designs waiting for execution.

He’s excited to get at them.