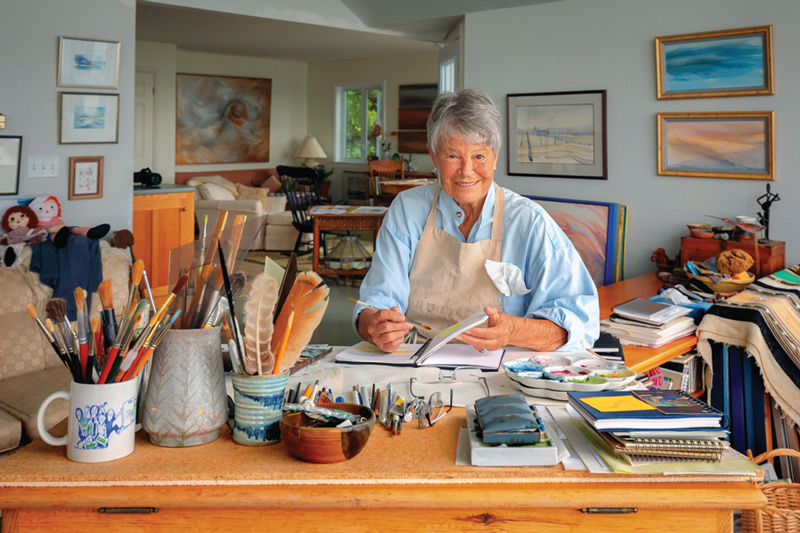 Even in self-isolation, Jennifer Chanter slows down to smell the roses.

At 10 years old, Jennifer Chanter contracted polio, and the isolation set her up for a lifetime of creativity. “There wasn’t much I could do so I started painting the flowers around me. My grandfather was a painter. It’s in my genes.”

Born in Montreal, Jennifer enjoys a full and very eclectic life. At age 12, she was awarded a scholarship to study under Group of Seven member Arthur Lismer at the Montreal Museum of Fine Arts.

In 1957, the Montreal Alouettes approached her high school, auditioning candidates for the team’s majorette squad. Already a school cheerleader, she passed the audition and joined the famous team that included Sam Etcheverry and Hal Patterson. “We crazy teenage gals had to learn how to dance, not only swing a baton. We led a professional marching band, including the Grey Cup parade in Toronto, and we were never allowed to break from the routine. Unfortunately, I was one of the taller ones, up front right behind the R.C.M.P. horses, and you can imagine what happened.”

The team had a reunion 10 years ago and invited Jennifer and her squad to attend. “We were now all over 70 years old and had to actually march on the old field, in a kick line. Afterwards, for the group photo, some gals said they couldn’t go down on one knee because they had a replacement,” she laughed.

After obtaining a Bachelor of Arts with Honours from Concordia University, Jennifer taught in Montreal, moved to Brighton in 1967, and taught in Cobourg before becoming the head of the art department at East Northumberland Secondary School. She has lived in Presqu’ile Park for the last 42 years and is a renowned landscape painter. “I always had an empathy toward country living. I began doing lots of benefit shows for historical societies like Brighton’s Proctor House and Grafton’s Barnum House.” She also apprenticed for four years with the internationally known master ceramist Jarko Zavi.

In 1976, Queen Elizabeth II recognized Jennifer as a young Canadian who excelled in arts and sciences. Her Majesty personally bestowed the honour at a Silver Jubilee banquet held at the Chateau Laurier in Ottawa. The invitation letter was beautifully embossed. Jennifer thought, “My goodness, this looks like it came from the Queen, and it was,” she laughed. “At the gala, I noticed how very tiny she was, and her diamond earrings were so big.”

In 1983, the Polar Continental Shelf Project sponsored her to record the eastern High Arctic. “It was primarily a science-based outfit from Ottawa sponsoring research projects in unpopulated areas above Lancaster Sound, in camps accessible only by plane, with Resolute as the base. Part of their annual mandate was to sponsor an artist to record the Arctic; to paint or write or photograph. Each year they picked someone from Canada. I was there for seven summers, around the Devon Ice Cap area, venturing as far as Ellesmere Island.”

One of her three illustrated children’s books entitled A Cold Desert Bloom features Arctic flowers. “I just wrote my first book for my grandkids, about the Arctic’s flowers, so children can see what those blooms look like.”

Her other books are A Marsh for all Seasons and That’s Life about her fun encounters with animals in Presqu’ile. Her books are available at Lighthouse Books in Brighton and Gallery 121 in Belleville. “All the proceeds go to charity. I give it to the food bank.”

Jennifer was a founding member of 3+3, Brighton’s first arts group in the 1980s. “We did every Applefest and shows for historical societies. For about 10 years, we were based in a log cabin located across from what is now the Whistling Duck. I also did everything from lettering church memorials to being a Girl Guide Commissioner, in my 30s,” said the former decorated Brownie.

Her many one-woman art shows included the Art Gallery of Northumberland in Cobourg (1984), Peterborough (1985), Kitchener/Waterloo (1988) and Science North in Sudbury in 1990, all based on her work in the Arctic.

Jennifer was on the Board of Governors of Loyalist College from 1990 to 1995, eventually serving as Vice Chair. She is also one of the founding members (1991) of Gallery 121, a non-profit, cooperative art gallery formed and funded by and for its artist members.

“I have always been an overachiever. In my 20s, I wanted to be a pilot in the Air Force but at the time, women were not allowed to fly a plane. The recruiter told me I could join but never fly. Why would I join the Air Force and not fly?”

Jennifer placated her curious nature by seeing the world.

She travelled frequently to out of the way places like Easter Island, paddled the Niger to Timbuktu, walked the Inca Trail, spent two months in Australia, flew over Mount Everest, visited Nepal, Tibet, Bhutan, Patagonia, Chile, Russia, Burkina Faso, Madagascar, and India. The summer she retired, she literally visited both the Arctic and Antarctic.

“I got a feel for those places, smelled the air, felt the earth beneath my feet. I didn’t want to stand on concrete and look at another cathedral,” she explained. “We didn’t go on a fancy tour bus or ship; we went by camel and Zodiac. I wanted the perspective and the experience. People can’t travel like that now.”

Along the way, she took every opportunity to interact. “It was important for me to support local artists. There was a little girl in Bolivia who was off to the side sketching. No one was paying attention to her, so I bought several pieces of her work. She’ll probably never forget that. I know I haven’t. I’d come home and feel so fortunate. I was an urban kid from the gritty streets of Montreal and now I’m an artist living in a provincial park.”

Her philosophy is simple. “When I wake up, I tell myself, ‘today I choose to be happy.’ You don’t head into the day thinking maybe you’ll be happy. You choose to.” Her approach to painting is equally purposeful. “I have never painted for glory. I have always had something to say, a message. For me, it was a process of creation, a new way of showing an idea or a new way for people to see the beauty around them, and to just be able to appreciate something. With every painting, I like to have a little bit of a challenge, to know if the viewer sat there, they would not say, ‘Oh that goes with my sofa,’” she laughed.

“Instead, I hope they think how beautiful that little piece of property is, how that hill blends like a braid, or the colours. You know, the clouds will not just be white and blue, but also little shades of pink and purple, colours of the prism. As soon as that cloud moves over, and has that shadow, I just want to put it down in watercolour, not to lose the joy of first seeing that thing. Painting is my soul, just me. I can’t live without it. I see everything in design form.”

At 80, Jennifer continues to paint. Her Small Works exhibition was held in Gallery 121 throughout this past July and August, featuring her latest venture into tiny vignettes, a visual diary, some 2½ by 3½ inches. Jennifer had to be persuaded by friends to participate, and she’s happy she agreed, but ultimately it led to a very strange exhibition. Covid kept the gallery closed, so her paintings hang there, beautifully curated, without visitors.

“I think people sometimes pass ordinary places without noticing Nature’s challenges; it sends out these wonderful little mysteries and observations. I taught my students art is in everything. It doesn’t matter whether you are designing a decal for a hockey team or a pattern for a fabric, all you have to do is look around you and see the colours available everywhere, which never stop being busy.”

Jennifer has pondered what can be learned from self-isolation during Covid-19. “I’ve learned people have to be self-challenged. I can’t believe the number who have called me and are bored. People had asked me what I would do after I retired from teaching. I jokingly said I would be bored. They assured me I would have lots to do, but they didn’t understand. I wanted to be completely bored, and then I would decide what to put back in my life. You know, I have never been bored in my life. There has always been so much to do,” she noted.

“We need to learn responsibility. I think there has been way too much self-indulgence. It’s unbelievable how people try to get away with the rules and regulations. Some don’t think of the greater good, instead just of how it impacts them,” she continued. “I hope people have learned more of a community spirit, more self-reliance, and more of what they can give back and not what they want to take from everything. We always taught our kids the world is their oyster and they have forgotten, with all these rights comes a lot of responsibility.”

Jennifer shared a last bit of perspective. “With this virus, stop being so damn busy. We are always on these darn devices. Everything has to be fast. I hope people can slow down and get back to something a little quieter and calmer and a little more introspective. I want to say to people I care and pick up a pen and paper to write to you especially.”