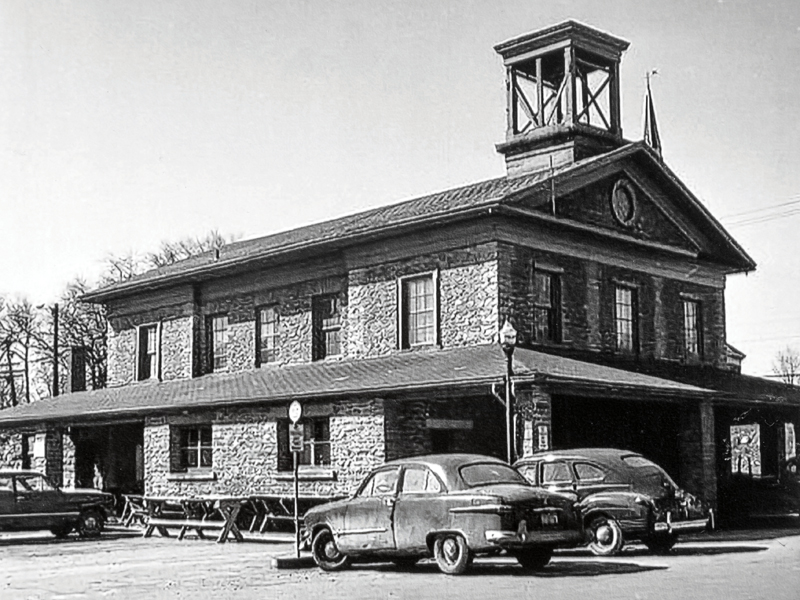 “A farmer and his wife were passing by in their horse-drawn wagon, on the way to market with a load of farm produce. Speculating that my mother might have gone to market herself, they took me onto their wagon. We clopped off to market while the farm wife tried to comfort me with soothing words. But I was not to be comforted so easily.

The market was jammed with people. Farm wagons piled with bright orange pumpkins, yellow onions and brown potatoes were backed up at the market square. Puppies in cages awaited buyers. Chickens squawked in other cages. A big blue policeman with shining buttons strolled through the mob of townspeople…”

This recollection from the pen of Al Purdy, one of Canada’s most beloved poets, describes his experience as a small lost boy, when Trenton’s town hall and marketplace were the beating heart of his community.

Trenton almost lost its iconic first town hall. By 1968, after years of neglect, the building was slated for demolition for parking lot expansion. The hall stood empty and vandalized, pigeons entering freely through broken windows. At an Ontario Municipal Board hearing considering the building’s fate, a descendent of the Honourable Robert Charles Wilkins (1782-1866), who donated the land for the hall, made a successful appeal.

The rest, as they say, is history. Lots of history. Mayor and Council gave their blessing to the newly formed Trent Port Historical Society (TPHS), sprung into being expressly to advocate for the hall’s preservation. The group took on the challenge of the proposals, permits, and reports required, raised funds from individuals, small business, and corporate donors, and stepped forward to help with the physical work of the restoration project.

Trenton Town Hall, the 1861 version, not the modern glass structure on the waterfront, is not just a historical remnant of the days when Trenton was at its peak. Busy Trentonians may not fully appreciate the treasure that is the first Trenton Town Hall, but there’s something about it. It is a dignified island in a sea of parked cars. The city fathers (Trenton was a village in 1861) went all out to engage as Kivas Tully, a prominent Toronto architect responsible for such impressive public buildings as Old Trinity College and Victoria Hall in Cobourg, to announce the importance of Trenton to its citizens and the wider world. The 1861 Town Hall was designated in 1983 under Ontario Heritage Act as “a building of architectural and historical interest.”

The building was designed in the classical revival style popular for mid-nineteenth public buildings, like nearby Napanee Town Hall and Picton Court House. Forms and trims based on those discovered in Greek and Roman buildings lent dignity and authority. White marble columns of Greek temples were suggested by white-painted flat-to-the-wall pilasters and corner boards; the white trims stand out against the limestone walls. The gable ends boasted a triangular pediment emulating ancient temples.

A belfry boasted a clock by which citizens set their watches, and awning roofs projecting from the stone walls sheltered farmers and customers on market days. Butcher shops and weigh scales occupied the south end of the building, and market days operated at the site until 1981, when Quinte West Farmers’ Market opened along the river. An archival photo shows a fire hose tower at the southeast corner. In early years the building served as drill hall and armoury, and housed band practices, a temperance society (1864), a Murray township Agricultural Society exhibition (1866), concerts, and social events.

Newspaper accounts from 1995 recall the huge efforts made to return the market building to as near original as possible, respecting 1881 carpentry techniques used in the timber frame barn construction. Old photos helped, as many elements had been removed over the intervening century. Exterior wood trims were repaired or reproduced; exact copies of the 1861exterior eared window trims and 32 new sash windows were built onsite. The 30-foot-tall pilasters were also reproduced at the site, each consuming 200 board feet of lumber.

Rear additions were removed, including a mid-century addition built using stone from the early house of merchant and mill owner Myers. TPHS President Deborah Chouinard recalls working in the building in 1973. She recalls the confusion when she re-entered years later to find the addition she’d worked in, created when the old market awnings were enclosed, had disappeared. Upstairs, vigorous spadework removed evidence of the pigeons’ occupancy. Part of the auditorium’s original tin ceiling was salvaged and used in the lobby and stairwell.

The restoration was accomplished totally through fundraising. A card presented to donors featured a historic rendering of the hall, an old square nail, and the words, “I supported the restoration of Trenton’s Town Hall (1861).”

The official name is Trenton Town Hall 1861: Heritage and Cultural Centre. Attractive signage invites the curious. It’s a history-lover’s delight: the building itself, the restored interior, the historic displays and resources, and the enthusiastic and knowledgeable volunteers. Even the modern washrooms are a treasure-trove, walls adorned with handwritten quotes from local newspapers: about circus elephants refusing the covered bridge and swimming the Trent. Or Canadian Press rescinding a report of four deaths, discovered to have been a movie shoot.

The museum features eight regularly changed display cases filled with artifacts, newspaper clippings, and photos, arranged by theme. Interpretive panels share the Hollywood North story, when Trenton was home to a silent movie industry producing over 1,500 silent films from 1917 to 1934. Drawers of photos and postcards line the research room walls. Artifacts tell the community’s story: an ornate wicker pram produced at Lloyd’s Baby Carriage Factory, a panoramic photo showing both Canadian National Railway (CNR) and Grand Trunk stations, the CNR roundhouse, and the massive white frame Hotel Tunnicliffe, gone by1920. A chunky mother of pearl shell with neatly punched out disks is a relic of production at the Canadian Pearl Button factory. A First World War era patchwork quilt of serviceable dark wool, embroidered 1916, and a Depression era quilt, patched from pieces of floral printed flour sacks provided by companies who realized impoverished wives were using the bags to sew clothing, relate our history through textiles.

The bright amateur paintings of Ila Jordan, who preserved Trenton’s homes, schools, businesses, and everyday life enliven many display cases. An embroidery sampler by 14-year-old Elisabeth Steavens in 1841 and the Queen Victoria chair, a tortuously carved mahogany chair adorned with coronet and gryphons, once a gift to all Canadian senators, invite inspection.

The enthusiasm and hard work of volunteers makes the museum run. Deborah talks about the museum’s mandate and challenges. The centre’s job is to collect, preserve, and display the history of Trenton and the wider Quinte West area. “Everything we have was donated by a Trenton family or business.” Dorothy James, one of TPHS founding members, donated a huge private collection. Photos are so informative; Deborah stresses the importance of providing names on photos, and details about the event being portrayed.

Like most small museums, TPHS faces the challenges of documentation, and artifact preservation, handling, and storage. Climate-controlled storage is a dream. For the moment, just having enough shelves would be wonderful.

“Most non-profits struggle, history ones more so…” Society membership ($20 individual, $30 family) tends to be small, workers even fewer. A core group of about eight people shares the load. “It’s vital to collect our history, but there are few with the passion. As people get older, we get it. There’s always so much to learn about what went on in the past, and we want to save it for the future.” Membership provides a built-in audience for talks, tours, films, and historically themed fundraising events.

Connie Beal is the energetic TPHS historian, and researcher for the Society’s hugely popular (4,000 followers) Facebook site. Her enthusiastic tours are a treat. Gillian Milligan, Society treasurer, created displays for Doors Open in September, while Wendy Ouellette, board member and Doors Open coordinator, organized the speakers.

The theme for the museum’s third Doors Open event, attracting 300 visitors, was the Gilmour Lumber plant. Deborah explains the industrial driver of early Trenton: “We exist because of them.” Author Donald Galna signed copies of a new book about David Gilmour, and popular local documentary filmmaker Sean Scally debuted his film Lumber Baron: The Gilmour Years to packed houses.

The TPHS is currently working on a plaque project supported by the Hastings County Historical Society. Plaques will commemorate pioneer Mary Bleecker’s ferry on the Trent River, industry giant Gilmour Lumber, and the Central Bridge shipyard which built over 100 tugs during the Second World War.

“So many people don’t know (or care) about their history. Do they know about Trenton’s shipbuilding industry, the British Chemical Company’s dynamite works, the lumbering and milling days, the railroad history, the film industry, the early businesses? There’s so much history in one little town,” sighs Deborah. She quotes a line from Michael Libling’s just-released Hollywood North: A Novel in Six Reels.

“Every town has its history.

Every town has its secrets.

Trenton’s secret is its history.”

At 55 King Street, Trenton, many of those secrets are waiting to be revealed.