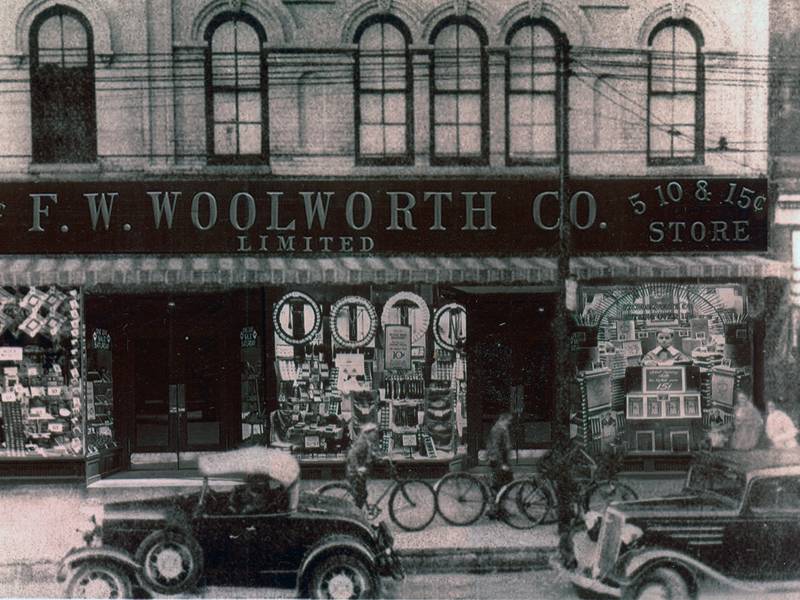 From County seamstress to Woolworth fame

Eliza Jane Creighton was born in 1850 in a log cabin overlooking the shoreline of Prince Edward County, Ontario. The granddaughter of Irish immigrants seeking a new life in a new land, she attended the school at Bongard’s Crossroads and the nearby St. John’s Anglican Church in Waupoos.

During her era, life was short, hard, and a perpetual struggle. On average, people lived less than 50 years – and it could be even less for women who often died in childbirth. So many families experienced loss that two other County residents, Katie and Maggie Fox of Consecon, achieved fame in the United States in the 1850s as founders of the American spiritualist movement charging $150 a night for their convincing performances that supposedly connected the living with the dead.

Eliza Jane’s life was also destined for something greater. Her fortunes changed forever in 1869 when the teenager ventured to stay with relatives in Watertown, New York while taking a dressmaking course. Through a chance encounter, Eliza Jane met a young store clerk named Frank Woolworth.

History is uncertain about just how the couple met. One version of the story states that they were introduced when Eliza Jane was sent to a local store to buy a spool of thread. Another says she occasionally worked at the same store, Augsbury and Moore Dry Goods, and was hired by his family to nurse a frail Frank back to health after he was fired and suffered nervous exhaustion. However, they met, the event changed both their lives.

Frank Winfield Woolworth (1852 – 1919) was one of two sons born on a farm in New York State. He and his brother Charles helped with chores before and after school. Frank left school at 16 to work on the farm, but he had little interest in it.

He once visited Watertown with his brother to buy a gift for their mother – a scarf they spotted in a store window. But their efforts to purchase the item for the 50 cents in change they had saved drew scorn from the shop’s clerks. It was a formative experience Frank never forgot. He took a bookkeeping course in the town riding back to the farm after night classes. His hard work and bookkeeping skills landed him a job in Watertown as an apprentice clerk at the dry goods store. He worked the first three months for room and board. At the start of the fourth month, he took home $3.50 per week. From all reports, he wasn’t particularly good at the job – a shy, awkward farm boy unaccustomed to dealing with store clients.

Marriage to Jennie, as he fondly called her, seemed to be the tonic Frank needed, and in June 1876, the two were married in the family farmhouse parlour. When his health recovered, he got his old job back and showed a new talent for displays and managing stock inventories. When a recession struck the U.S. economy in 1877, leaving his employer with surplus unsold stock, Frank suggested a sale of five-cent items. Everything sold out.

In 1879, the young couple approached family members to finance a five and dime store in Utica, New York. That store struggled and soon closed. But a second F.W. Woolworth Great Five Cent Store opened on June 21, 2021 in Lancaster, Pennsylvania with gross sales of $127.65, one quarter of their entire stock. Within a few weeks, they opened a second store in nearby Harrisburg managed by Frank’s brother Charles. Over the next 25 years, the family established stores across the United States and Canada. By 1900, they had over 1,000.

They often hired family members to run their stores. Jennie’s sister, Mary Ann Creighton, was the first woman manager of a Woolworth store in charge of the Poughkeepsie outlet. She was so successful she was promoted to manage the company’s first store in New York City with over 150 staff. She sold 50,000 items on her first day at work. Jennie’s brothers, Thomas and Allen, opened branch stores in Connecticut. Frank’s executive assistant was another Creighton, Henrietta.

Family control ensured stores maintained company standards and profits. Relatives and employees were encouraged to buy shares in the firm to capitalize its expansion efforts. And the Woolworths were also shrewd business people. They established the Friendly Rival Syndicate, a buying consortium with five other independent chains that lowered costs while adding diversity to product lines. Woolworths began selling candy, books, sheet music, and novelty items imported from Europe in addition to their line of household wares. The consortium later merged under the Woolworth umbrella with a company stock offering that raised $65 million for the syndicate founders.

In the early years, Jennie raised her three children – Edna, Helena, and Barbara -within Woolworth stores tucking her sleeping infants into counter drawers. As the girls grew older, she withdrew from the business into the comfort of her luxurious homes – a mansion on Fifth Avenue in New York and a massive summer place on Long Island. Frank was busier than ever running his retail empire expanding into the United Kingdom in 1909. Within five years, the British division of Woolworths – known affectionately as Woolies - operated 44 stores. In 1913, he completed the construction of what was then the world’s tallest building – The Woolworth Building in New York – at a cost of $13 million bankrolled entirely from his own pockets. When it opened, every inch of the place was rented out to some of the most prestigious U.S. companies. Even postcards of the place were hot sellers. They sold one million of them.

Although he showered his daughters with elaborate gifts when he was home, Frank was no longer home very often. Jennie confided to friends that she had been much happier when they were poor. As they grew older, their girls lived unsettled lives. Edna was unhappily married and committed suicide. Her four–year-old daughter, Barbara Hutton, who discovered her mother’s body, later squandered her $500 million dollar inheritance over the course of seven marriages including her marriage to movie star Cary Grant.

It could also explain why there are no pictures of the couple together, although family lore also suggested that Jennie hated having her picture taken and refused to have photographs displayed. Only three images of Jennie exist as a young person, in middle age, and as an older woman.

By 1916, Jennie Creighton withdrew even further into a private world - a victim of dementia, a tragic disease sometimes known as “the living death.” Talk of her hometown of Prince Edward County seemed to animate her. Although the community had less than one-third of the population required for a Woolworth store, Frank opened a Woolworths on Picton’s Main Street In 1915 hoping the business would restore her health. The store “opened for love” lasted only five years. When Frank died in 1919, tight-fisted company officials closed the unprofitable Picton store the following year. According to the new management team, the best way to honour Frank’s memory was to maintain a profitable business providing the highest returns to shareholders.

Jennie Creighton Woolworth lived in her silent world until her death in 1924 at age 74 when she was re-united with Frank in the family mausoleum in Woodlawn Cemetery in New York. The couple was spared the turbulent years to come – the Depression, wars, and changing times. In the late 1930s, Woolworth stores in the United States were staggered by staff strikes protesting low pay, long hours, and the company’s restrictive policies. Loyalty was prized and could be rewarded with a slow rise from starter jobs to management positions. Many employees were women. Marriage and children spelled the end of their working career at Woolworths. New federal legislation in the United States raised minimum wages, encouraged collective bargaining, and empowered trade unions.

Woolworths was a retail phenomenon forged from another time. In March 1937, photos of protesting staff laying on countertops in company stores were splashed across American newspapers. To meet worker demands for more pay, Woolworths granted higher wages, but cut staff, and introduced self-service to maintain profits.

By the 1990s, the company Frank and Jennie founded had abandoned its roots in the United States. One hundred stores became part of the Walmart chain while others were re-packaged as Footlocker Inc., Bargain Shops, or other brands. During the 2008 global recession, its U.K. division closed 815 stores and dismissed 27,000 employees collapsing under a mountain of debt that successive government bailouts could not resolve.

In the 1900s, the Woolworth empire was a dynamic, innovative business focused on meeting the thrifty shopping habits of consumers and driven by the imagination and hard work of its founders. It was a remarkable retail success that began as a love story between two people of very modest origins. Today, there are few traces of the founders or their business.

Amid the collection of the Macaulay Heritage Museum in Picton there is a small, silver thimble – a donated gift from the Creighton family once used by Jennie Creighton Woolworth during her days as a seamstress.