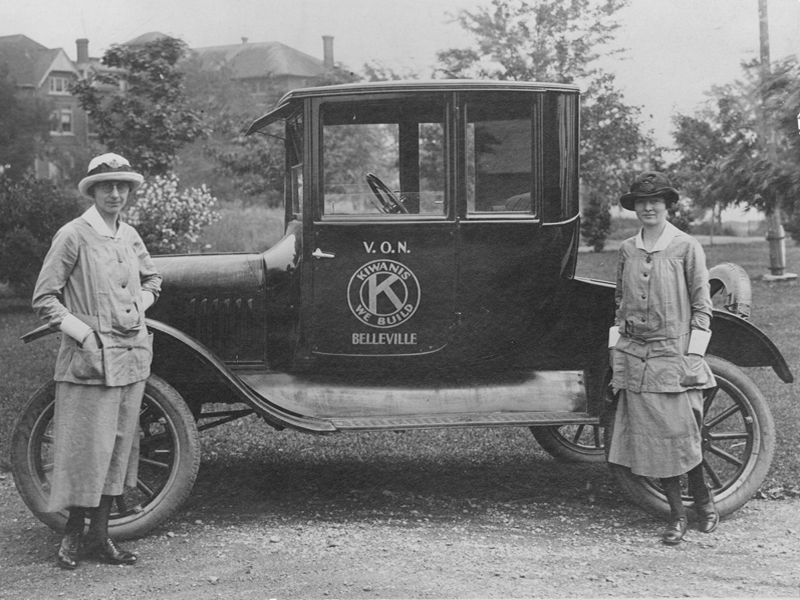 A Century of Service

In the 1930s, two tiny sisters, barely five feet tall, Dorothy and Grace Connor of Belleville, Ontario donned the distinctive uniform with its starched white collar and cuffs of the Victorian Order of Nurses (VON).

“I remember I used to see their cars going by and these girls in their uniforms. I didn’t like the look of those uniforms with the blue and white stripes.” said Dorothy, in a 1990 interview with Belleville’s Intelligencer. Still, the two were drawn to the profession. “It really made me feel as though you were doing something,” said Grace.

For the next 30 years, they carried their black leather bags and knocked on doors to provide health care to hundreds of patients in their homes. The story of the Connor sisters is part of the remarkable legacy of the VON, the longest serving health care organization in Canada. It is celebrating 100 years of service locally and nationally 120 years.

The VON was first founded in Canada in 1897; a response to the desperate need for community nursing for new mothers and children and in honour of British Queen Victoria’s Diamond Jubilee.

Lady Ishbel Aberdeen, the wife of the Governor General of Canada, and an early feminist in her native Scotland, championed the cause of the VON after she became aware of the terrible infant mortality rates in remote rural areas. Canada was still a young country and there were few hospitals, physicians, or nurses to service new settlers. Many women died in childbirth while their husbands traveled miles in search of a doctor.

At the turn of the 20th century, nursing was still a relatively new profession.  The Trenton VON office now serving Hastings, Northumberland, and Prince Edward counties first opened its doors in 1917. VON provided care to the poor and the isolated, charging only those patients who could afford to pay a small fee, often $2 or less per visit.

To facilitate home visits, it was necessary to find modes of transportation for VON nurses. In the early 1900s, bicycles were the favoured and most cost-effective choice. By the 1930s, the VON were among the first female drivers to share roadways with men. Local service clubs such as the Lions and Kiwanis then, as they do today, generously donated cars. The Connor sisters recalled driving a stylish Model T Ford, which made it possible for them and just one other nurse to cover the entire city of Belleville.

The VON’s slogan - Health Starts at Home - describes their focus on community-based health care. From the early days of assisting new mothers in their own homes, one of the VON’s greatest strengths has always been its ability to grow and adapt to community needs.

June Rickard, a former Executive Director of the local VON and a member of the organization for 17 years, said, “In the Quinte area, early activity in 1917 and onward saw the focus on prenatal care, safe baby deliveries, and postnatal care. It was realized that a healthy child would lead to a healthy family, which would then lead to a healthy community. It was broad thinking for those early days!”

During its 100-year history, the VON has faced many challenges. In the mid 1900s, the VON endured one of the greatest health crises - the crippling effects of tuberculosis. More Canadians died of this lung disease in four years than were killed in the First World War.  Local neighbourhoods were not spared, as the VON made daily visits to patients in their homes, without charging them.

During both the First and Second World Wars, many VON nurses travelled overseas to assist in temporary hospitals set up to treat the wounded. The few nurses left behind focused on childcare so new mothers were visited regularly and nurses also performed physical examinations in schools.

In 1918, the VON was on the front lines when Spanish Influenza swept across the country. Many VON nurses became ill themselves while treating entire families. Records show only two nurses took care of hundreds of patients in the tri-county area, while more than 20,000 Canadians died from Spanish flu. Thousands more were saved by the efforts of local hospitals, doctors, and community nurses.

As a not-for-profit charity, the VON has always relied on the generosity of the communities they served. Until the mid 1960s, it was funded directly by patients and community donations. Only those families who could afford to pay were charged, but that model has changed.

Lynne Heeney, a retired nurse, former Chair and member of the VON Board said now the board’s main purpose is to raise money for programs. “The government lends funds, about 80 per cent for various programs so 20 per cent has to be raised locally. It’s challenging.”

Funding challenges aside, what has always sustained the VON has been the support of an army of volunteers. June explained, “Regardless of how community needs have changed and with them the kinds of programs and services the VON provides, volunteers have remained a constant, essential part of the organization. “In the tri-county area today, more than 400 volunteers work alongside 400 VON staff.

In 1999, local VON assisted the military to provide health care for hundreds of refugees from Kosovo - families fleeing their war-torn country. Dubbed Operation Parasol, refugees - 300 a day arriving at Canadian Forces Base Trenton - were given food, clothing, lodging, a medical assessment, and customs clearance.

Today’s VONs don’t look like their early sisters. Gone are the starched collars disapproved by the Connor sisters. VON services mirror the change in communities. “Growing populations and an aging demographic are escalating the need for elder care. The VON will continue to play a vital role in the future,” said June.

Today, VON nurses still knock on doors often providing follow-up health care once handled only by hospitals, but Lynne suggested, “Most people are not aware of the breadth of work done by the VON. It’s truly remarkable.” Here, in the tri-county area, the VON offers a staggering range of community support services including 25 health and social programs delivered by nurses, personal support workers, and therapists designed to help keep seniors independent. From transportation, to Meals on Wheels - healthy, hot meals delivered daily - to overnight respite for caregivers weary of caring for an ill loved one to exercise programs and even home maintenance and repairs, the VON assist thousands of people every year.

A snapshot of 2016 statistics tells the story. In the tri-counties, personal support workers delivered more than 145,000 hours of care. Visiting nurses delivered 89,000 hours. More than 52,000 meals were served to seniors in their homes. More than 2,232 clients took advantage of the SMILE—Seniors Managing Independent Living Easily programs. More than 4,000 seniors joined in the exercise classes.

The legacy of care provided by dedicated VON nurses like the Connor sisters continues. Collectively, the Connors served for 50 years. Both sisters lived to be 96  years old and in reflecting on her career with the VON, Grace said, “If I had to do it again, that’s the course I would choose.”

The VON is part of Canada’s story: it’s also part of the story of women in Canada and it’s the story of the profound changes in health care that each decade has delivered. The Victorian Order of Nurses is a national treasure committed to a second century of service.