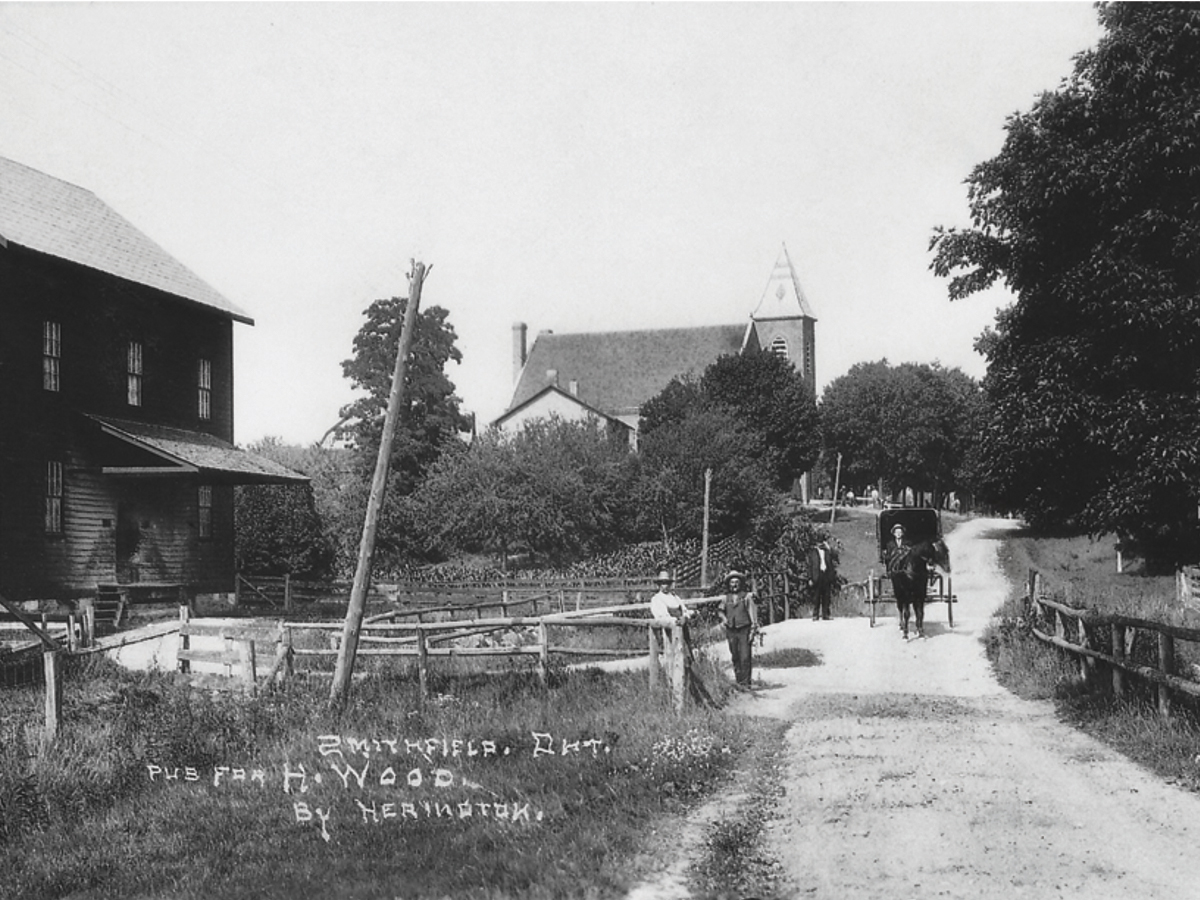 Smithfield is a hamlet between Trenton and Brighton. No, it’s not. I’ve driven Highway 2 hundreds of times, and never passed through Smithfield.  Is Smithfield one of those vanished communities, one of those ‘dots on the map’ in road atlases? (CQL Winter 2015.)

It’s there. Next time, turn north onto Walt Street, past the ‘Welcome to Smithfield’ sign, and follow the road into history. For Smithfield (Dundee once upon a time) lies along an even more famous road, the Danforth Road, named for Colonel Asa Danforth who in 1799 began the huge task of surveying and building a road between York and Kingston. Not surprisingly, the road was far from satisfactory, and quickly reverted to nature. But old Asa would be vindicated were he to visit Smithfield today.

Smithfield is alive and well, thank you very much. It started out in Murray Township, and ended up belonging to Brighton Township. Its story is preserved in Women’s Institute Tweedsmuir histories compiled in the 1950s and in the more recent Brighton Township, by Florence Chatten.

Smithfield was settled by United Empire Loyalist John Smith and wife Mary McDowall, and sons Abijah and Robert, who received the Crown patent around 1790 for a large acreage along powerful Smithfield Creek, which spawned several mills over time. Farming, lumbering, and milling occupied the pioneer families’ lives. Their presence is still felt; John Drummond Smith and his descendants rest near the creek in a family burying ground.

Residences of all ages, among them the 1820s home of Robert McDowall Smith, stretch the length of leafy Smith Street. General stores and a post office, taverns, tradespeople, and train station came and went. The tidy bedroom community is still graced by Smithfield Carman United Church and cheered by the children of Smithfield Public School.

The road through town narrows as it travels eastward, the forest draws nearer and the view out to Lake Ontario reveals Highway 2 below, running in parallel. Smith Street turns sharply south to connect with the King’s Highway. Local businesses dot Highway 2 in the wider Smithfield community.

Old photographs entice the visitor back into Smithfield’s past. Many original homes are recognizable, as are the old streets and the route of the well-behaved trickle that once powered early mills. One of the last mills endures in a rural residential neighbourhood north of town along White’s Road.

Head for the Murray Hills. Visit the magical Pixie Hill Art and Craft Studio (by appointment) or bucolic Timber Ridge golf course north of Smithfield. Or park the car and walk the neat sidewalks of the village. Listen for the creek. Look for the history. It’s there.