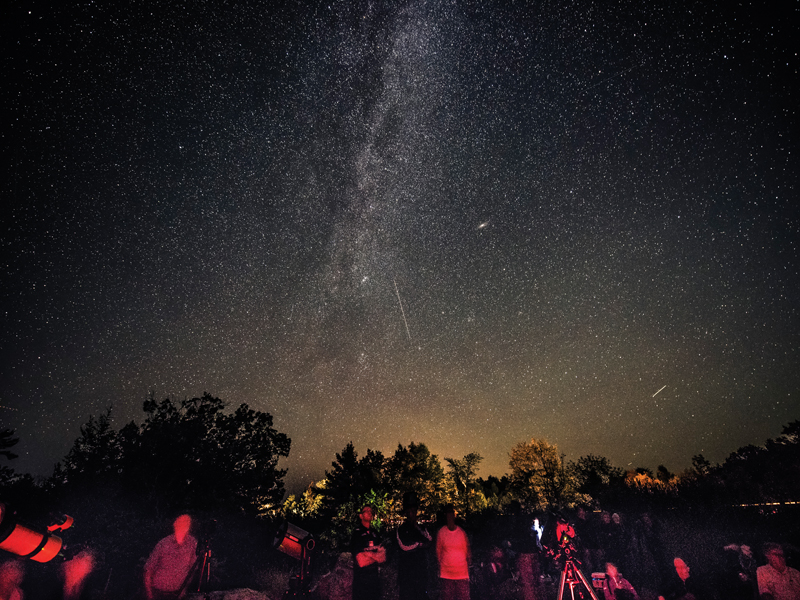 It seems there are increasingly more celestial events encouraging us to look up to the night sky. At the end of January, sky watchers were treated to a Blue Moon (second full moon in a month), a Blood Moon (total lunar eclipse) and a Supermoon, (when the moon is at the closest point to Earth in its orbit). The lunar event was promoted as a Super Blue Blood Moon, a rare event not seen in North America for more than 150 years.

Terence Dickinson is a Yarker-based astronomy expert who has been watching, photographing, teaching, and writing about the night sky for 50 years. Ask him about these seemingly increasing celestial phenomena and he chuckles. “Media more and more are latching on to these celestial events that seem to be of public interest. They do get people out to look, but they’re based on astrological mumbo-jumbo.” In fact, many of the recent events featured in the media are regular occurrences in the night sky. A Supermoon, for example, appears once every year.

That doesn’t mean people shouldn’t take the time to look up at the night sky. Unfortunately, for a large part of the population, light pollution from highly populated areas prevents a clear look at the sky at night. “The light-pollution-free night sky is now something that 80 per cent of the population of Canada has never properly seen,” said Terence. “Because they don’t know where to go; they don’t know what to look for.”

For sky watchers in the County and Quinte area, there is a solution – the Lennox & Addington County Dark Sky Viewing Area, the most southerly dark sky site in Ontario. Located a 30-minute drive north of Napanee on County Road 41, the Dark Sky Viewing Area (DSVA) offers a night sky experience similar to what was available a century ago. The site opened in 2012 and is available year-round with no admission charge. The DSVA attracts sky watchers from all over, including a large number from the Greater Toronto Area. “It’s as dark there (at the DSVA) and astronomically excellent as it is about three hours north of Toronto,” promised Terence.

Terence discovered the site by accident in 2010 as he was driving on County Road 41 to Pembroke where he was teaching evening enrichment classes in astronomy at Algonquin College. At the time, the DSVA site was a gathering spot for construction equipment and materials for crews working on roadway reconstruction. “One time when I was driving back from Pembroke, I stopped – about halfway,” recalled Terence. “It’s just a hamlet. I got out and it was a really nice night. I thought this would be a perfect spot because it’s just on the edge.” As he said this, Terence flipped through a large hardcover book, The Backyard Astronomer’s Guide, which he co-authored with Alan Dyer. He pointed to an illustration depicting light pollution over North America. The edge referred to by Terence is the most southerly spot north of Lake Ontario where true dark skies emerge and is the precise location of the DSVA.

Armed with his ever-present enthusiasm for the night sky and his desire to share it with others, Terence approached Lennox & Addington County. He pitched the idea of a viewing area to Stephen Paul, Director of Community & Development Services, who embraced it almost immediately.

“I’ve gone to places before where there’s a possibility of doing something and they don’t know what I’m talking about,” said Terence. “Whereas Stephen, right away, he understood the implications if you have something special within the County and you let people know it’s there and you spruce it up a little bit, it would be a good idea. At least that’s what I was telling him. We were about 15 minutes into it and he said, ‘Stop. I like it. I like the idea.’ They invested in making it a nice site for people to go in. They cleared the construction stuff and put a concrete pad in to put up telescopes.”

Rob Plumley, Community Development Officer with Lennox & Addington County, described the site, “It’s a big concrete platform contoured with the land. We had a local designer help us with that. The lines in the concrete point to true north, which helps people setting up their telescopes. The interpretive signage tells why that location was chosen and a little bit about what to potentially look for.”

The viewing platform accommodates about 40 people at a time and there are 30 parking spots, with an expansion planned. Many visitors bring lawn chairs or blankets to be comfortable as they gaze upward. Individuals can set up their own telescopes if they have them, or they can take advantage of those set up by more experienced sky watchers.

Terence was a frequent visitor to the DSVA in its early days and conducted guided tours of the night sky, pointing out celestial objects of interest to other sky watchers. After being diagnosed with Parkinson’s Disease, he had to cut back on many activities. He passed the night sky tour guide responsibilities to Joe Gilker and Tim Trentadue, two local amateur astronomers and astrophotographers with great interest and enthusiasm for the DSVA and the night sky in general.

“In 2014, the DSVA had a photography contest,” said Joe. “I was taking photos all the time – mostly from the DSVA and from around the area. It was a Lennox & Addington County-wide photography contest. I entered a bunch of my photos and the judge of the contest was Terence Dickinson.”

“He is indirectly the guy who got me into all this. I used to watch him back in the ’90s on the Discovery Channel; he had a weekly or bi-weekly appearance where he would talk about the night sky. I used to make it a point to watch his appearances on the show. Then eventually I stumbled across one of his books called NightWatch and I bought that. It was such a great book. I loved it so much. Shortly after, I went out and bought my telescope and started. I kept getting his books because I liked his style and his way of explaining things. Fast forward 15 years and he’s the guy who’s judging this photo contest. I ended up winning the contest.”

When Joe received a call from Rob Plumley asking to meet with him and Terence, Joe didn’t hesitate to accept the invitation. “Terence had been looking at my pictures online, reading through my blogs. They were looking for somebody to do monthly presentations at the DSVA and asked me if I would volunteer to do this. I thought about it for 30 seconds or so before accepting and I’ve been there since. I’m going on my third year.”

Joe considers himself more of an astrophotographer than an astronomer, but taking effective pictures of the night sky involves knowing what he’s looking at, so he has learned a lot over the years and continues to learn. He thoroughly enjoys sharing his knowledge as a volunteer tour guide at the DSVA. “One of the most fun parts of doing it for me is seeing the sky with people who aren’t used to seeing it. Sometimes more than a hundred people show up at that tiny little site and probably at least two-thirds of those people have either never seen this at all or haven’t seen it in decades.”

Joe fondly recalls an East Indian family visiting the DSVA from Toronto. Four generations gathered to look at the night sky together, with the younger generation translating for the elders who did not speak English. “At the end of it, the elderly gentleman shakes my hand,” said Joe. “One of his grandkids is translating and saying his grandfather had been in Canada for about 40 years and had never seen skies like this since he was a little boy growing up in India. It was so nice to see that kind of reaction from someone.”

The DSVA now hosts regular events during moonless weekends beginning in May and continuing through September. Two nights per month, visitors can watch a 90-minute, laser-guided tour of the night sky (check www.DarkSkyViewing.com for this year’s events). Joe and Tim set up their telescopes and show sky watchers what’s happening in the sky, using a laser pointer to highlight constellations, planets, and stars. The tours begin approximately one hour after sunset, with the first half focused on seasonal constellations – explaining how things move in the sky and highlighting any specific activities on that night. The second half is the telescope viewing with visitors invited to come up to look for themselves.

Even Joe is surprised sometimes at the night sky events that occur. “The first one we did last year in May, we ended up with a surprise show of northern lights. I had never seen northern lights like that from this area before. Literally from before dark, we could see a green glow in the sky just as the sun was setting and right until I left at 4 a.m., the sky was aglow. I was giving my presentation, but nobody was really paying attention because they were looking at the northern lights. Even I was horribly distracted by it. It was the excitement with people seeing it for the first time. That excitement was palpable.”

Joe, Terence, and Rob all point out special equipment is not required to enjoy night sky viewing. The naked eye can see a great deal, and binoculars also work well. “People don’t think of looking up with binoculars at night, but binoculars are two small telescopes,” said Joe “In many cases, you actually see things better than with a telescope because you’re looking with both eyes so you’re getting your stereoscopic vision and there are so many things you can’t see with the naked eye that all of a sudden just pop right out with binoculars.”

In the foreword of the third (and final) edition of Terence and Alan Dyer’s The Backyard Astronomer’s Guide, Robert Burnham, the former editor-in-chief of Astronomy magazine, writes, “If you, too, feel the tug of the stars, there’s no better place to begin than here.”

The same could be said of the Lennox & Addington County Dark Sky Viewing Area.