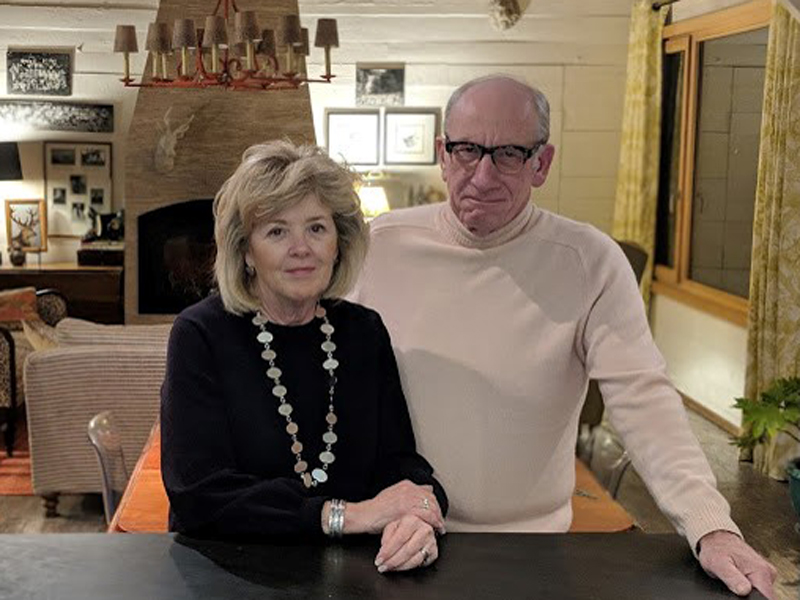 The end of January is a good time to throw a dinner party, that is if you can track down friends who haven’t snowbirded south. Post-Christmas cabin fever was setting in when Suzanne and James Wright invited Joanie and me to dinner at their rambling red-brick farmhouse on the Quaker Road. The Quaker Road runs west of Picton and north off County Road 1. Many of the early United Empire Loyalist pioneers in Prince Edward County were Quakers, also known as the Society of Friends, from New York’s Duchess County on the Hudson River. That included the Morden family who built the brick Italianate house that currently stands at the end of the road.

The Wright residence is private, almost secluded, the last home on the dead-end road. Offset by a magnificent dairy barn painted green, the house sits on a knoll, strutting its bay windows and imposing height. The home has been an ongoing renovation project since the Wrights moved here, but now James has retired, the pace of restoration has picked up. All the windows have recently been replaced by German-engineered airtight black steel frames that shout out their precision and snug fit.

James is in the courtyard adjusting lights on the pergola, which doubles as an outdoor dining pavilion, as we pull to a stop in a scrunch of packed snow. Always cheerful and gentlemanly, he guides us gingerly across the shovelled path. Suzanne has the email moniker ‘designwiz’ for a reason. She has had a flourishing design consultancy in Toronto for years, and now is masterminding the Quaker Road house as a 100-acre country estate in the English style. James is all hands-on, hammer, saw, and sweat, with Suzanne as the guru of finishing details, interiors, and textures. Everywhere you look bears testimony to a partnership in sync with each other’s sensibilities. The farm has not been worked since the 1950s and much of the land, except for 30 acres currently under cultivation, is now covered in dense bush teeming with coyotes, turkeys, and deer.

“We purchased the property on June 23, 2002, exactly 25 years after our wedding,” James explains to my insistent questions. “The house was built in 1864 by Richard Morden and is depicted on Tremaine’s map of the County as Pleasant Green with Lucy Morden named as the owner.”

Suzanne picks up the thread. “The house had never been modernized. There was no running water, a three-holer outhouse attached to the back of the drive shed, plaster was falling off the walls, putty off the windows, and paint off the trim. The house had been uninhabited for 30 years and was host to many birds and bats.”

“What a mess,” she exclaims, “but an exciting project for an optimistic couple, somewhat naïve, who could see the bones of the structure.”

Amos, their young Airedale Terrier, barks our arrival from the back room, caged for the moment, then liberated to make the sniff rounds of the visitors. “King of the Terriers,” James pronounces. “Brilliant, mischievous, and energetic.” “My cardiologist is very happy,” James boasts, “I have dropped 30 pounds since taking charge of Amos.”

Suzanne greets us in the new kitchen, gleaming, tiled, and polished in every corner. Pretty and country chic in a dark top over black trousers, she waves her hand in salute to the new kitchen. She has blonde good looks and a flawless English complexion.

“How do you like it?” she enthuses. What’s not to like? Pale grey cabinetry, charcoal interiors, black slate countertops, and a centre island of quartz. All appliances are hidden behind panels.

Suzanne studied art history and worked for the West Baffin Eskimo Cooperative before setting up her own IBIS Interiors, a Toronto based interior design company. She still spends about half her time each week in Toronto where the Wrights maintain a small pied-a-terre.

James introduces the other dinner guests, long-time friends Jack and Veronica, and Michael and Ursula, then ushers us into what can only be called the Great Room, a cavernous converted driveshed which James has finished single-handedly in barnboards, hand-hewn beams, and stone. He stands tall and dignified by the huge airtight fireplace at the far end of the room, the only source of heat for the Great Room, to take our drink orders.

While I do not think of James as a clothes horse, he is always smartly turned out, tonight in a pink cashmere turtleneck over comfy cords. This tailored presentation is probably a habit of his 30-plus years as a teacher and counsellor at Crescent School in Toronto, a much-loved figure of wisdom, integrity, and advice. I have insider knowledge of his legendary status from my nephew Chris, who spent eight years at Crescent. He assures me Mr. Wright was a revered Mr. Chips-like father figure to generations of lads. James comes by his nurturing ways honestly. His brother is an Anglican minister and his father, Canon Wright, presided over a thriving parish at St. Cuthbert’s on Bayview Avenue in Toronto. All three of Joanie’s daughters were baptized by Canon Wright, followed by lunch and pink champagne at home.

We move next door to another long and beautiful room where a dining table is set in glittering service for eight. On route, the guests stop in astonishment in front of what I thought was an oversized abstract painting but turns out to be a traditional pull-down classroom map with a dated colour delineation of Europe. A birthday gift from Suzanne, the actual map from James’ math classroom (he was head of the math department before coming Academic Dean). Michael, who knows of such matters as a long-time teacher and administrator at Upper Canada College, explains, “The boys often taped Playboy centerfolds, Miss April being a favourite, in the centre of the map to muffled laughter when the map was pulled down from the ceiling bracket.”

At one end of the room sits a traditional rib roast of beef the size of which I haven’s seen for years. After grace, intoning thanks for, “Our blessings, good friends, and good fortune,” James, a skilled carver, distributes slices of perfectly cooked pink beef with Yorkshire pudding, carrots, and potatoes to a table of bubbling conversations. Suzanne has made a mocha cheesecake for dessert.

The cold, the snow, the prospect of two more months of winter, recedes in the collective moment of camaraderie and shared County living. There is the inevitable talk of political turmoil and the angst of Generation Z and millennials. The Wrights have two children who make regular visits to the Quaker homestead, occasionally getting hijacked for some heavy lifting on the renovation front. Aynsley, married with two children, lives in the Beach area of Toronto and works for Toronto Hydro, and son Christian lives in Charlottetown doing energy conservation work with Energy PEI. “When they come, it’s work in the morning and play in the afternoon,” James says. “A winning strategy for everyone.”

We retire back to the Great Room with the roaring fire for more conversation and classroom stories. Joanie and I excuse ourselves in anticipation of a five o’clock start the next morning to drive to Charleston, South Carolina. Swirling snow and a storm forecast make me wonder if we will be able to get away. On the way out I ask our hosts what secret of a successful marriage they would like to share, theirs being manifest tonight of a magic formula. “Luck and shared vision,” wise James jumps in. “And endless patience,” Suzanne adds, giving her husband a knowing glance.