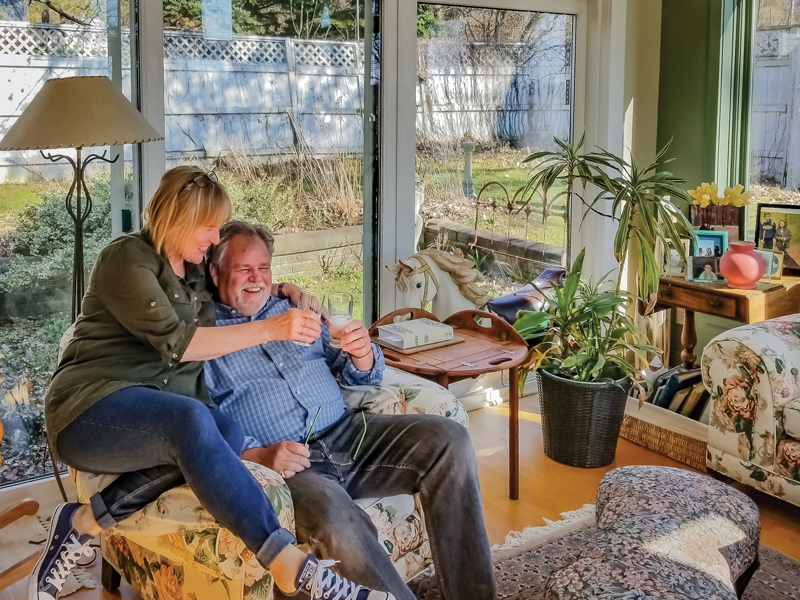 The invitation from Peni was simple. “Come for vodka tonics in the shade under the big maple tree. I will put out the wicker furniture.” The winter has been mean, far too long, and brutish. Now spring is playing tricks so the prospect of cocktails at the water’s edge with Peni Patrick and her husband, Victor Lind, gives us a jolt of optimism – that invigorating fever Canadians feel at the turn of seasons. Like us, Victor and Peni have returned from a month in the Low Country in South Carolina and are disappointed in winter’s reluctance to bid adieu. Joanie and I are cheered by the idea of drinks in early May, longer days, early buds, spreading green in the hedgerows, and ice in our cocktails instead of Picton Bay. We don’t have to drive far from Glenora along the Loyalist Parkway to the Patrick/Lind residence outside of Picton, where the bay opens to a view of Long Reach. A painted frog with bulging eyes on the signpost announces both the house and the studio of the artist, one Peni Patrick.

Victor greets Joanie and me at the front door of the former schoolhouse tucked into the shoreline. Dressed casually in dark cords, and a cashmere V-neck sweater over a white cotton shirt, he is a big man – think rugby halfback – with a physicality that would be intimidating without the soft voice and gentle manner. But make no mistake about the passionate point of view. He gives us a tour of the rambling home, very English and cosy, with unexpected nooks and corners, room after room, all chockablock with art, antiques, and mementos of two lives and careers. The view from the windows over the water is exhilarating, bringing to mind the precept that long views and distant perspectives induce tranquility, hope, and deep thinking.

“This schoolhouse was attached to the Loyal True Blue Orphanage which sat over there,” Victor says pointing to an area immediately west of their home. “The Loyal True Blue Orphans’ Home was opened with great fanfare in 1899 and was a recognizable landmark in the County for years. We have the first class list.” The orphanage was later converted to Picton Manor, a hotel, and burned down in 1941. Victor stops in front of a hand-painted fabric banner, fraying at the edges, with the slogan, “We protect our orphans.” Victor retrieved this from the Loyal True Blue Lodge Enniskillen #4 (Picton) when it closed a few years ago. “The love of history runs strong and deep in my family.”

Peni is waiting for us through the dining room in an all-window room that might be called a conservatory. She is an attractive woman who exudes warmth and embrace and always exudes charm and good humour. She is dressed in a blue linen blouse over beige pants. Her paintings, portraits, still lifes, and landscapes, figurative in style with a hint of abstraction, are everywhere, on the walls, on the floor, filling the space with colour and memory. After earning a degree in psychology at McMaster, Peni had a career in Special Education, both teaching and as the Ontario Director for the Canadian Association for Young Children. She points out and she should know, “most things you need to understand about life, you can learn from four- and five-year-olds in kindergarten.”

Peni became serious about painting when she retired. “I always wanted to paint as a child. Fred Varley, one of the Group of Seven, was my art teacher in the evening at his home. AY Jackson used to come over and wait for the class to finish so he and Fred could have a glass of wine.” Judging from the splendour of the art around me, including a portrait of Peni’s mother she did for her teacher, Varley would be proud of his young student. The works are both expressionistic, and impressionistic. “My focus is on energy,” she says. “I pay more attention to light and dark than getting an exact likeness.”

Victor was raised in Oakville and graduated from the University of Waterloo with a degree in Urban Planning. His had his own consulting practice specializing in land development and was licenced as a commercial real estate agent. We know a lot about Victor’s family from a memoir his sister, Plum Johnson wrote about growing up in Point O’View, their rambling 22 room home on the water in Oakville. They Left us Everything is a heartfelt story about what parents leave behind. The memoir, which features a cover of a family photo including Victor as the youngest of five children, won the RBC Taylor Prize for Non-Fiction.

“That was my sister’s take on the family,” Victor explains. “Mine is different.”

Victor and Peni were married at Point O’View nine years ago, the last family occasion in the house before it was sold. They discovered the County a few years later, buying the schoolhouse property within hours of seeing it. Between them they have four grown children living in Toronto, three sons and a daughter, from their first marriages, all launched and independent. Just as Peni has reinvented herself as an artist, Victor is leading the charge on several environmental issues, like Save Picton Bay, to keep the waters of the harbour clean and navigable for everyone in the County. He is also a skilled woodworker with the tools, shop, and inventory to prove it. He made an imaginative product for everyone on his Christmas list this year – elegant toaster-tongs to retrieve toast from toasters. “Please make one for me,” I plead, feeling the burn in my finger from this morning’s dig for a deep-set slice.

We move to the leafing maple with tumblers in hand where Peni has arrayed the white wicker furniture. The late afternoon light is the colour of champagne and equally intoxicating. We morph into a zone of calm and well-being. “This is our summer ritual,” Peni says. “Every day, 5 p.m., bay side with vodka tonics.” There is much to look forward to. Peni is going to Avignon, France on a painting course and Victor is planning another motorcycle road trip with his biking pals. They motorcycled Croatia last fall. I ask my favourite question, the one about the secret to a successful relationship. Peni jumps in. “Honest communication and ensuring your partner feels loved.” Victor adds. “Trust. Complete trust.” We clink glasses. “And separate holidays,” Peni toasts.