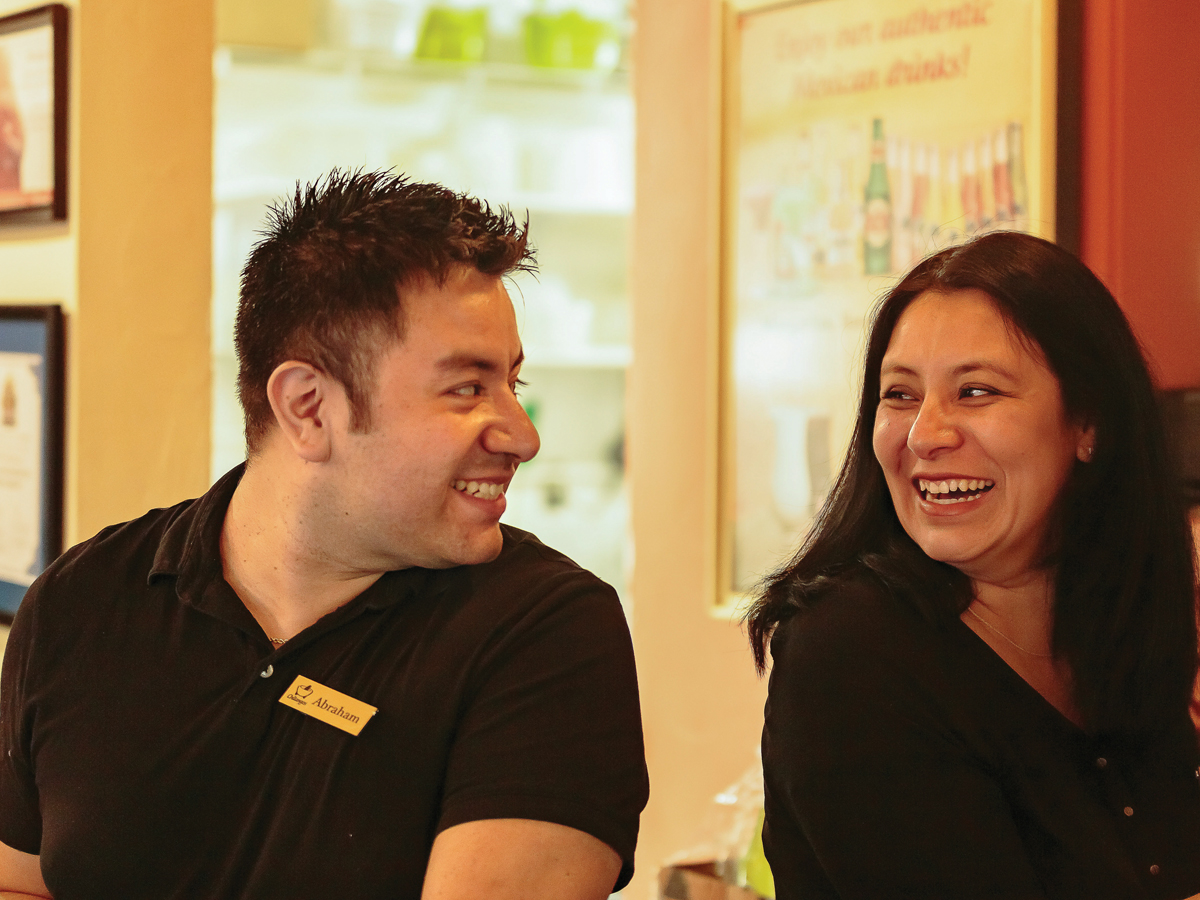 Born and raised in Mexico City, Marlem Power and her brother Abraham Ramos Serrantos have fond memories of family gatherings, which always revolved around food and the dinner table. They brought that family atmosphere, combined with a variety of fresh, authentic Mexican cuisine to their downtown restaurant, Chilangos, when they opened in 2016.

Chilango is a term used to describe someone who was born in Mexico City.

It’s been a circuitous journey to launching the restaurant, beginning when 18-year-old Marlem ventured to Canada to learn English as a second language. She honed her new language skills while working as a live-in caregiver for a Kingston family, who sponsored her to become a Canadian citizen. She continued to live and work in different Ontario cities – meeting and marrying her husband along the way – until they settled in the Quinte region in 2008 when he was posted to 8 Wing/CFB Trenton.

After finishing a university degree in international relations in Mexico, Abraham followed in his sister’s footsteps and came to Canada in 2010 to improve his English. Marlem had completed a culinary course and was working for a catering company at the time, and was able to secure a position for Abraham. The owner sponsored him to become a Canadian citizen.

“After taking the culinary course, I developed my love to cook, but I always dreamed and was thinking about the plates of Mexico,” says Marlem. “I was talking to my family back home to exchange recipes. That’s how I practiced. I was using those flavours.”

The brother and sister discovered the City of Belleville’s annual Waterfront and Multicultural Festival and applied as food vendors. It was an opportunity to bring some of their traditional Mexican flavours to the Belleville public and check the response.

“We can remember our first waterfront festival,” laughs Marlem. “Our sign was made of cardboard. We were painting it the night before just to make sure we had the name of Mexico. All our community was behind us from that very first event. It was such a big success we ran out of food.”

Adds Abraham, “We did the festival for five years, from 2011 to 2015. That last year, we started talking about the idea of a restaurant. By then, I had gained my permanent residency in Canada, and we decided we were going to do it.”

The siblings approached Trenval Business Development Corporation and were given assistance in developing a business plan. They pooled their savings and secured a loan to get started. They found an ideal location at 394 Front Street just below the Moira River bridge; complete with a patio overlooking the river. The only drawback was the street was completely torn up as the City of Belleville was in Phase 1 of its downtown revitalization project. Nonetheless, they took the plunge and opened their 27-seat (now 110) restaurant in March 2016.

“Nobody wanted to come downtown with the roads under construction,” says Abraham. “We were surprised the first or second day, the lineups were out the door. It was a very fast pace.” The siblings worked 16-hour days in the early years, often starting at 5:30 a.m. It was important for them to get the formula right and to establish their distinct roles in the business.

Abraham’s role is to manage the front of house, including the serving staff. “We have achieved what we have because he’s a vision man,” says Marlem. “He can foresee into the future and he plans toward meeting the next goal. I can definitely be there for him for support and share my opinion a little bit in order to keep us balanced.”

Balanced they are: Marlem is the more outgoing sibling, often the first to respond to a question. Abraham appears more thoughtful and waits to respond but adds a little extra colour and background to his sister’s perspective without stepping on her toes.

Chilangos is a warm and colourful place with Mexican décor on the walls (including a sombrero) and Mexican music in the background, filling the gaps in table conversations and laughter from diners. Frequently, the sound of the blender interrupts everything as a frosty margarita is prepped and poured at the bar.

In pursuing their goal of bringing authentic Mexican cuisine to the Quinte region, Marlem and Abraham have had to work on modifying some customers’ expectations.

“There are certain misconceptions about Mexican food,” says Abraham. “Like hard tacos. In Mexico City, we will never have a hard taco. All tacos are soft in Mexico. We will have some certain type of crispy tacos, but they are rolled.”

When guests come in expecting to have that type of experience, the siblings stand fast in their traditions. “We tell them no; we don’t have that. As well, we have tried to keep our consistency. We have not opened our menu to get into Tex Mex or American or food from other cultures.”

However, the menu does accommodate dietary trends and restrictions many customers have. For example, 90 per cent of the menu items are gluten-free. Vegan vegetarian, and certain food allergies can be accommodated.

Most people equate Mexican cuisine with spiciness. To the contrary, most of the menu items are mild in heat level, and the spiciness can be controlled according to the amount of salsa added.

“What will always compliment a good taco is the type of salsa we serve,” says Marlem. “We go back to the salsas of mild, medium, or hot. Those are the family recipes of how we prepared those salsas. The salsa chipotle (mild) has more of a smoky flavour. The green salsa is medium, made with tomatillos. The salsa arbol, the hottest one, is made with one specific pepper that will make the flavour of the salsa. The salsa morita uses a completely different pepper. The salsa taquera is a combination of both (arbol and morita). The different kind of dry peppers will bring the aromas and the flavours into the food.”

As the kitchen director, Marlem orchestrates considerable activity in a small space. There are up to six employees working together in the kitchen, and all the activities must well-coordinated. “We will have the chicken poaching. We will have beans on the go. We will have the poblano peppers roasting, then we can put them aside so they can sweat, and we can peel them while we are cutting the chips in order to fry them. At that point, we may need to strain the chicken in order to purify the broth to make the rice. That same broth will be used in many of the salsas. Everything has a procedure.”

Many of the Chilangos customers have been to Mexico and recognize the native flavours from their vacations. There are some regular customers who are on a mission to try everything on the menu, which now has more than 40 options. They come every week to try something different. Others stick to their tried and true favourite item.

Antojitos (anto-hee-toes), pico de gallo (peek-oh duh guy-oh), huevos rancheros (hway-vose ran-chair-ose), chile relleno (chil-ay ree-ay-nyo) … when read aloud, the menu is lyrical and engaging. In Spanish, a J or G is pronounced like an H and an LL is pronounced like a Y.

“One of the most popular items on the menu which we are famous for (because we won the Spicy Food Contest in 2017) is the enchilades verdes,” says Abraham. “It’s a very authentic Mexican dish with green tomatillos which we import from Mexico.” Adds Marlem, “It is one of our spicier dishes, but we have toned it down since the contest.”

Asked about their personal favourite menu item, both siblings say “sopes (so-paws)” – handmade corn tortillas with refried beans, lettuce, onions, cheese, and sour cream. “It reminds me of my Grandma,” says Marlem. “It brings memories of when I was working with the dough at home with her. On every occasion when I went back and visited my parents, my mother always used to make them.” Abraham adds, “That was a Saturday brunch type of thing in Mexico.”

The Chilangos food has been endorsed not only by Canadians who have visited Mexico, but Abraham and Marlem’s family members. Their mother has visited and enjoyed the food; she expressed her pride in her children’s accomplishments. “Last summer, we had a group of 10 family members visit and they were able to see the opening of the new section,” says Marlem, adding Chilangos can now seat 110 diners. “They were able to try all the dishes here in the restaurant. They said, ‘This is it. This is Mexico.’”

Marlem is proud of the Chilangos staff, and notes that it’s a multicultural team. “Having people from all these beautiful cultures working with us is amazing - people from the Philippines, Guatemala, Venezuela, India, Italy, Canadians, Native Canadians. Seeing us working together, it’s a really good thing. People take their job seriously and it’s wonderful.”

In addition to meeting the needs of their regular clientele in the restaurant, Marlem and Abraham have started catering, including providing lunches for some area schools. They’ve also been asked to serve a Quebec-based tourism company, providing meals for as many as 53 people arriving by bus en route from Niagara Falls to Quebec.

The siblings are proud of what they have accomplished at Chilangos in a few short years. One of their greatest achievements is creating a family environment for their 21 employees.

“Our employees work with us, not for us,” emphasizes Marlem. “It’s important to have employees working together with us shoulder to shoulder. We do care about them and I know that they always give their best for us.”

In Belleville, on the banks of the Moira, everyone at Chilangos is family.