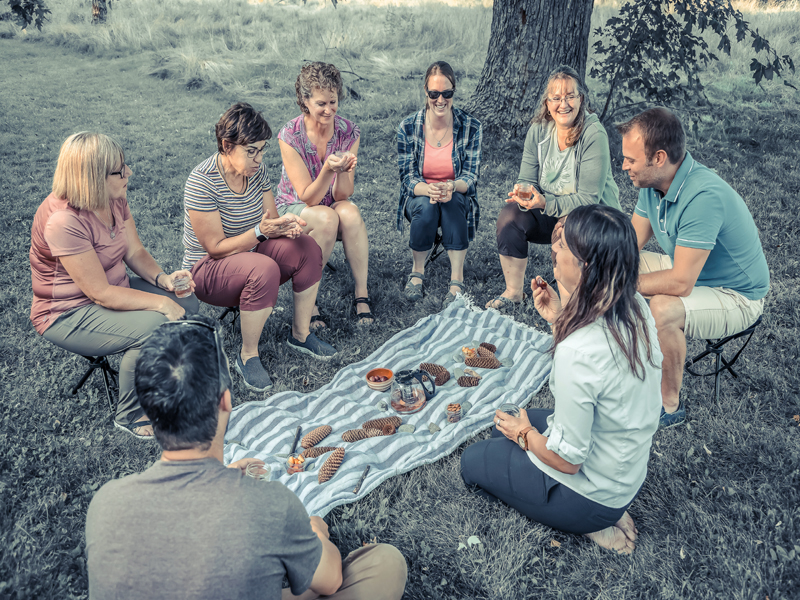 Finding Yourself – and Healing - in Nature

I first met Jessica Spooner at a women’s wellness weekend, where she was leading a forest therapy session for attendees. Along with about 10 other women, I decided to try it – not really sure what to expect. As she handed out portable camp stools to each of us for sitting in the forest, Jessica explained the history of forest therapy.

It is inspired by the Japanese practice of Shinrin-Yoku, or forest bathing. The Japanese government was seeking ways to help curb the high level of mental illness and realized spending time in nature is very therapeutic, lowering blood pressure, stabilizing mood, improving sleep, and boosting the immune system. The Japanese government designated many of the country’s forests specifically for forest bathing, offering volunteer guides to take people for long walks in nature.

In North America, the Japanese practice has been somewhat adapted. Jessica received training and certification as a Forest Therapy Guide through the Association of Nature and Forest Therapy, which calls itself the, “World’s leading forest therapy certification program.”

As a guide, Jessica’s role is to lead a group on a two-to-three-hour nature walk while providing invitations for sensory opening activities along the way. Interestingly, the walks only cover about a kilometre in total, but the pace is slow and deliberate. On our walk, Jessica helped us to tune in to our five senses to take in the natural environment and focus our minds in the moment.

“There are a few pieces to a guided walk,” says Jessica. “One is giving permission to people to just be in that experience and also permission to not watch the time. The guide has the time and for that two or three hours you can just be in whatever way that is, whatever comes up for you. That alone is empowering and also shifting. There are very few spaces where you can do that.”

Jessica is right. How often in our day-to-day lives do we actually slow down long enough to really take in our surroundings - particularly in an outdoor setting? It’s quite powerful to open yourself up to whatever comes. On the guided walk I participated in, I was able to tap into happy memories from my childhood with vivid images of my grandparents’ farmhouse, where I often spent time. I hadn’t thought about that in decades and it was really comforting, particularly since my grandparents are now gone.

Jessica describes the walks as a shared experience, but also a very independent experience. “I led a walk at a spa for their executive team. It was the boss’s decision to take the staff’s phones away first. One of the staff was upset about it when he found out., I led the walk and there were two things that happened for him. One, he realized he doesn’t feel comfortable being alone; and two, when he was invited to smell the earth, it made him remember South America where he’s from and the farmland he left.”

Jessica has personally benefited from spending so much time in nature, saying forest therapy has brought her many lessons she would never have anticipated. “You can learn things you’re not quite expecting. For me, what forest therapy has done – in January, I quit consuming alcohol. I just kind of stopped. I had never felt secure in a space enough to just do it. After the holidays, I thought, ‘Let’s see what happens.’ Doing forest therapy in a clear headspace for weeks and months has been pretty profound. I’ve had things come up – realizations or things to reflect on – just clarity.”

Jessica calls her forest therapy business Blue Bark & Co. – the Co. is for collaborate and community. Blue Bark is a reference to the blue hammered lichen that grows on the bark of a tree. She launched the business in 2018 and has guided several groups throughout Ontario since then.

“I remember a presentation for a program, Outdoor and Adventure Education in Haliburton. At the time, I didn’t know what I wanted to do, but I kept that brochure for years and I became an environmental person in post-secondary. I travelled all over the place. I wasn’t really sure where I fit. I was moving and found the brochure and decided to take this course. I studied at Fleming College in Lindsay and it aligned with adventure tourism.”

Jessica worked in Costa Rica for a time before returning to Canada for a teaching position at Loyalist College. She was toying with the idea of starting a company that offered cycle tours or backpacking and one of her good friends suggested gearing the business to women only.

“As soon as she said that, a light went off. I’d been in cycle groups and rock-climbing groups with women only and something special happens you can’t even really put words to; you just have to experience it when it is a women-centric or women-identified group. As soon as she said that, I knew it was right. Absolutely. I wanted to try to eliminate some of the barriers women may experience in trying to get into this activity.”

That was how Women Hike Wild got started. Jessica does all the planning for the trips, provides the equipment, and even dehydrates and cooks meals so all the participants need to do is show up ready to hike.

During one of her Women Hike Wild trips two years ago Jessica came up with the idea of Blue Bark & Co. She noticed the participants were really opening up to one another with meaningful conversation and they seemed very comfortable sharing in that space. She realized if this sort of opportunity was facilitated and intentional, it could be a beautiful thing.

“I started looking into eco-therapy, healing outdoors, and things like that. Forest therapy came across. I pushed it aside. Two months later, I saw it again. It was a different day, a different feeling. I looked into it more and I talked to my partner. You do a one-week immersion, then there’s a practicum that follows. Something just happened. Before I went, I said I didn’t want to be a cliché, like, ‘Oh, I’m transformed,’ but it totally did transform me. In a sense, I’d never felt more aligned.”

“One of my goals is to amalgamate both businesses in a sense the trips will become wilderness therapy. Taking the idea of having women out for longer than a night – really let them diffuse and get them out of their comfort zone by backpacking or whatever else comes up. As I get other guides, I can do more things, have intentional weekends.”

With the help of a colleague in Toronto, Jessica also offers nature-based life coaching programs. She is taking additional courses herself to become a certified coach.

One of the most beautiful experiences on a guided forest therapy walk is the tea ceremony at the end. Jessica finds an open space and lays out a blanket with a small mason jar for each participant to use as a teacup. She forages plants from the forest to make the tea. “I befriend a tree and ask permission and practice reciprocity with the space I’m in, then make a tea out of the needles. I love white pine, white cedar, sumac. Our last council, where we sit in a circle and share, we get to breathe it in and see it and taste it. It’s a nice way to end. I’ve started to incorporate gifts of gratitude as well. People share their gratitude.”

Adds Jessica about the tea, “You get to taste the forest, but you also get to bring a little bit of it with you.”

Jessica says spending time in nature is powerful therapy. “It brings people back to a time when they were unencumbered by the weight of the world. It’s innate in all of us. We were born in the natural world.”

The blue lichen that grows on the bark of trees is actually a combination of fungus and algae. The fungus collects moisture while the algae collects food. They have a symbiotic relationship without impacting the bark below. It’s the perfect name for a forest therapy business – allowing people to take in all that nature has to offer without leaving any trace behind.