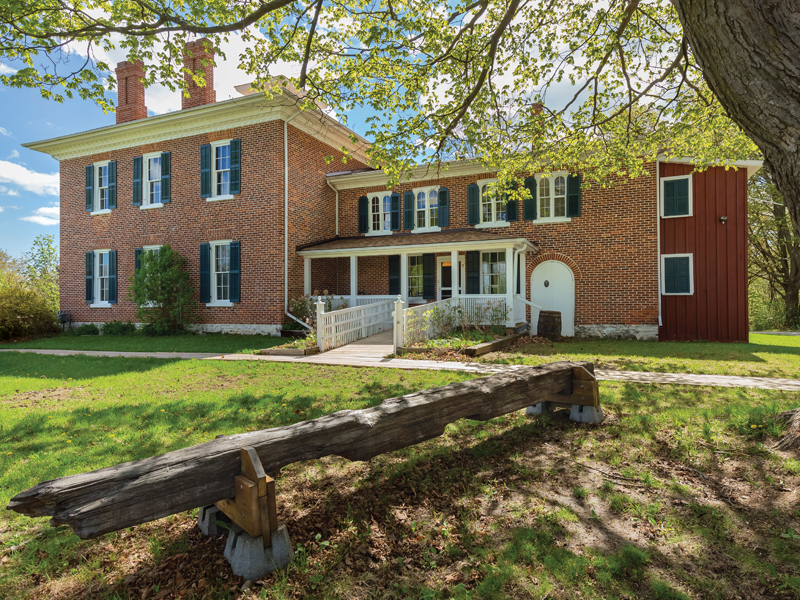 There’s a fine view to be enjoyed on a summer afternoon in Brighton, Ontario. From the rooftop belvedere of a stately Italianate home perched on a hill, a visitor can admire the town, the shore, and the lake beyond, just as John Edward Proctor would once have done. John E. Proctor was a business giant who accumulated significant wealth, power, and prestige in the area during the second half of the 1800s – and a Brighton legend.

J.E. Proctor was a man of vision, from a family of ambitious men. His grandfather Josiah brought the English Puritan family north from Vermont to Cramahe township in 1810. His father Isaac built one of the early stagecoach inns along the Kingston Road, the 1820s Proctor Inn, which still stands west of town. It was John Edward who would rise to prominence in Brighton and leave an important house to tell his story.

It is believed Isaac built an early saltbox house on the property at Concession 1, Lot 1 (later Young Street) about 1853. John and eight siblings grew up here. In 1867 and 1868 John had the house enlarged – adding a two-storey pattern-book Italianate in red brick, with all the new features: bay windows, bracketed cornice, portico, round-headed windows, and a rooftop belvedere. He named the house Millbank after his mills on the property. At the same time, the early house was raised to two full storeys, its exterior wood trims and windows changed to match the main house.

Viewers of the long-running Victorian crime drama Murdoch Mysteries will have had a glance around the Proctor House and property. In Season 10, Episode 12, when the house doubled for the estate of a Toronto lady in distress, viewers attended a garden party on the Proctor lawn among giant maples while detectives followed the shady lane to a suspected crime scene. Emotional interviews in the parlour provided glimpses of the dark wallpaper, rich woodwork, furnishings, paintings, and lamps of Proctor House.

The impressive house and its rich interior were the expression of John E. Proctor’s wealth and position in society. He’d done well. He started out as keeper of a general store in 1845, adding a flour mill and saw mills to his portfolio – close to home and further north at Hilton and Orland. It was the lumber boom era; the forests of Northumberland County were there to be harvested and converted into wealth. In 1858, J.E. Proctor purchased a wharf at Gosport, built two ships and purchased three more, erected warehouses, and started a shipping business between Montreal, Oswego, and Rochester. He shipped grain, lumber, and potash, and brought in salt, sugar, tea and tobacco, glass and candles. John was also a moneylender and shrewd businessman. He amassed more than 2,000 acres of property, donated land for an Anglican church, and served in municipal office.

But change was to come. In 1887 a block of Proctor buildings burned; in 1890 several uninsured ships were lost in a storm. Farms were mortgaged to meet payments. The Proctor herd of purebred Hereford cattle was shipped to the west. The 1890 McKinley Tariffs ended the boom days of shipping grain to the U.S. and the railway put an end to ship commerce.

Wife Adelaide (nee Weller) of Carrying Place bore 10 children, raised nine to adulthood. The children were educated in private schools or entered business. Life gravitated toward their Toronto connections. In later years, daughter Stella remained in the house with another spinster sister, and then alone until her death in 1960. Contents of the house were sold at auction, correspondence, and valuable documents misplaced. The house began to deteriorate and was once thought lost.

It was J.E. Proctor’s vision which built the family home and fortune, but it was the vision of a group of phenomenally dedicated volunteers who ensured the survival of Proctor House. Local Lions Club stalwart Dr. Frank Dunnett stepped up, negotiating an agreement with Proctor heirs in 1966 to develop the house and property as a recreation area. Sadly, despite Herculean efforts, the playground and ski hill developed by the Lions succumbed to vandalism, and the project was abandoned.

When town council could not be induced to take over the property, the club again contacted the heirs who eventually agreed to deed the property to the Lower Trent Region Conservation Authority. Hopes for repurposing the house as offices were dashed when a prohibitive cost survey was completed: the house was to be demolished. Its roof had failed, water had damaged brickwork and interior plaster. A corner of the foundation had collapsed. Windows were smashed. Only the most optimistic history-minded citizen would take this one on.

Fortunately, Brighton has history types in abundance. After an eleventh-hour reprieve a citizen’s committee sprang into action and in 1972 SOHO (Save Our Heritage Organization) was formed. SOHO leased the house from Lower Trent Conservation for a dollar a year - an agreement extending to 2036 - with the stipulation exterior restoration take place within five years, interior refurbishment in 10. It would take heroic action. Luckily, there were heroes to be had. The charter members list reads like a who’s who of civic-minded Brightonians.

Government grants were obtained for labour, all materials costs were covered by exhaustive fundraising. SOHO volunteers did everything: strawberry socials, sales of memberships, and everything imaginable, donation campaigns, and participation in every community event. With all the energy put into fundraising these many years, Proctor House should glow in the dark. (Perhaps that’s the origin of the ghostly light myth?)

Inside, drywall replaced ruined plaster, the house was rewired, a furnace installed. Faux oak graining was reinstated on interior wood trims, the house was furnished and ready.

In 1976, under torrents of summer rain (this was never going to be easy) 800 souls attended the opening. Dignitaries unveiled a plaque dedicating the house and park to the people of Brighton, in memory of the pioneer Proctors and two sons lost in the Second World War. Grassroots heritage activism had brought into being a worthy community museum.

Proctor House museum portrays the lifestyle of a well-to-do mid-nineteenth century merchant. Many Proctor family items, and hundreds more donated, loaned, and carefully selected period pieces fill the rooms. In 2017, a Proctor descendant in Victoria repatriated the elegant dining room suite, miscellaneous furniture, and items associated with Stella: a huge collection of her hand-painted china, and a silver candelabra presented to her by local Anglicans. The prairie Proctors visit occasionally; it’s nice to have a museum in the family.

Drive north from the centre of Brighton and take the jog onto Young Street. At the top of the hill, enter the parking lot, and another era. Everything evokes the past: the house and flower gardens, fields and woods beyond, the shaded lane and creek where mills once stood. Follow the plank walkway to the white-painted portico and enter 1867.

Inside the spacious front hall, costumed guides welcome museum-goers and point out intriguing details in every room. The front hall boasts costly original red flash glass above the entry doors. To the left, the parlour impresses guests with reproduction wallpaper and elegant furniture, including a parlour grand piano rescued from a Presqu’ile Point cottage. To the right, the bright morning room features the home’s only fireplace, of white marble said to have originated with family in Proctor, Vermont.

The principal rooms could be closed off with unique pocket/folding doors or opened to the central hall to create a ballroom for large fundraising and church events – the Puritan Proctors were not given to lavish entertaining.

In the office down the hall, John E. conducted business and collected rents on his many Brighton properties. The window was formerly a door, to keep the hoi-polloi out of the grand house.

Staircases are a recurring theme.

The steep staircase rising from the foyer and curving up to the second-floor landing sports a structural anomaly; the stairs were an afterthought, a must-have John purchased while travelling. A sharp-eyed visitor may spot the offending detail.

The upper hall provides a dizzying Escher-like view down the stairs and upwards to the rooftop belvedere. There’s a sun-warmed seating area for the ladies beneath the tall arched windows overlooking the town and the lake. Next door, a Proctor cradle occupies the master bedroom where John E. died, and a guest bedroom displays clothing and textiles.

A hall leads back to the old section of the house, an interconnected series of rooms and slip-rooms for servants and children. The precipitous stairs with a tight turn at the bottom leading back to the kitchen must have collected many tumbling Proctor offspring.

The two wings of Proctor House, built at different times, allow for the interpretation of the wealthy family’s lifestyle, the below stairs life of servants and seen but not heard children, and the day-to-day work of the farm. Visitors are treated to a huge collection of housekeeping artifacts, from a primitive dry sink and hand pump to the wood cookstove moved each year to the summer kitchen for the hot work of canning and pickling. Off the kitchen, three slip-rooms contain more stories.

Out back, a summer kitchen, woodshed with arched wagon doors, and a two-storey convenience complete the tour.

There’s more. In 1973 the Proctor barn was deemed unsafe, and demolished. Volunteers once again sprang into action. The circa 1850 Simpson barn (Isaac’s wife was a Simpson) was donated, dismantled, moved, and reassembled down the slope from the house, overlooking the former farm, now Proctor Park.

Not content with providing historic atmosphere, the weathered structure opened in 2002 as the Brighton Barn Theatre, the sole source of support for the operation of Proctor House, but for an annual municipal grant which covers insurance. Volunteers do it all – production, acting, singing, and dancing. This year, the theatre features two comedies and the popular annual Christmas at the Barn.

Proctor House was built by a man of vision and rescued by citizens with matching energy and vision. Proctor House museum has been operating for 43 years. It’s a heritage project supported by Save our Heritage Organization and the Lower Trent Region Conservation Authority.

This summer, pay a visit.

Climb the stairs to the rooftop belvedere.

See what SOHO and the Brighton community saw.

See Proctor House for yourself.