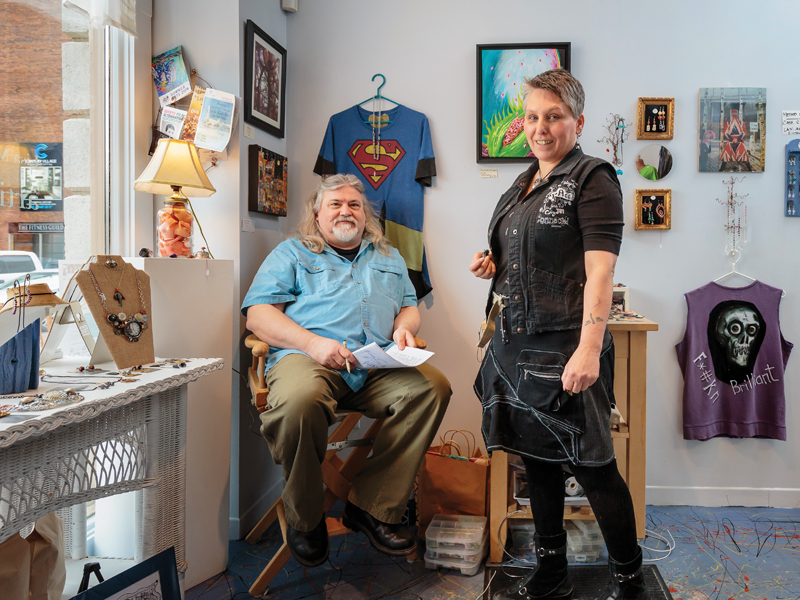 Lisa and Peter’s call to creativity

“Just show up!” Chat with Lisa Morris and Peter Paylor at their downtown Belleville gallery, or at their market stall, and the words may come up. It’s their challenge to their adopted community, a call to arms to support local theatre, visual artists, musical events, social justice initiatives, new performance venues, and individuals attempting something unique in the arts and culture domain. It’s about turning up, engaging others, generating ideas, making things happen – creativity as a way of life.

Lisa’s business card introduces her as a recyclist, artisan jeweller, sculptor, director, and playwright. Perhaps her jewellery is most well-known, luscious collages created from materials as disparate as family treasures, broken costume jewellery, recycled tin, brass, and copper trays, used copper electrical wire, and yes, bicycle inner tubes. Her earrings and pendants are wearable art, objects with meaning and story, not just things from a shop.

Lisa tends to look, not at what things are, but at what they could become. Recently she started a line of refashioned clothing, cutting up old garments and putting them back together in novel ways. Peter points out the downside, “You can’t just get something, you have to cut it up and make something else! I liked that shirt!” The ideas keep coming. With Lisa, wait five minutes and she’ll be doing something else. Peter laughs, “As soon as she arrived today, she made a lamp base out of doll parts.” The woman is fearless, challenging, endlessly energetic; there’s nothing she won’t try.

Lisa ponders where it began. She recalls creating a milk jug bird feeder when she was seven, forfeiting the needed return deposit for the delight she felt when the birds came. She’s a lifelong thrifter. Raising kids on her own with limited means has always meant living by her wits and second-hand stores. Life wasn’t always easy, but this past 10 years in the peaceful non-toxic environment the couple has created has made a difference to Lisa – and to Peter.

Theirs is a creative partnership, synergistic. “I couldn’t do what I do without Peter.” Their life together has a rhythm, happily solo creative time balanced by periods of intense conversation, ideas sparking. Full-on people time balanced with restorative stillness. This life is challenging. It’s hard work to get things to market, to live on a tight budget, but it works because they love what they are doing, surrounded by people who value and encourage them.

Words are in Peter’s past. There’s a fleeting reference to an English degree, short-story writing, work with a publishing company, lunch with Tiff Findley…

Peter has 10 one-act plays to his credit and more in development. He recalls the ‘why not?’ moment Marvin Tucker mentioned an upcoming one-act play festival. He had a story he wanted to tell, and suddenly – a way to tell it. “The characters started talking and they wouldn’t shut up!” Lisa remembers being in the next room, hearing him laughing as the characters took over the writing.

Peter wrote that first play in 2015 and had a Neil Simon moment. “This was the place where I would spend my life.” Ordinary happenings inspire dialogue. “I get this look, and someone gives me a piece of paper, because I need to get the words down.” He is well-known not just for his stage plays, but for fostering playwriting and production in the area – and beyond. “The theatre thing just exploded. I wrote a play; it went to Eastern Ontario Drama League’s (EODL) one-act play festival and that was it.” He recalls the impact of seeing his words come to life on stage.

The Rosewood plays, The Rosewood Art Society and Tales from the Tavern, and later, Where the River Flows (city boy meets country life, and a turn in the road) are rich with Leacock-like observations on small town life and human nature. Promotional materials for Quinte West’s Old Church Theatre and Kingston’s Domino Theatre describe the appeal of Peter’s plays. “Likeable characters in unlikely situations with a fine balance of warmth and humour.” Some of the funniest are to be found in the suite, Four Criminal Acts. The plays range from hysterically funny, with so-dark-why-am-I-laughing moments, to gently satirical to bittersweet to those satisfying just desserts endings.

Judie Preece, who with friend Kathryn Dalmer, has acted in Tea with Roger (Audience Choice at EODL 2017) and The Green Thumb Gang, admires Peter’s writing. It’s ordinary dialogue, gleaned from keen observation, but always with a twist, wherein lies the humour. Take The Green Thumb Gang ladies. They’re thieves, innocently making up ridiculous excuses when caught. Or his choice of words. Who hasn’t thought of Cheezies as little orange turds? But Peter says it!

Peter is a great believer things always work out. He recalls having an epiphany some years ago. He was in Toronto, at the Sorauren Farmer’s Market. He’d just sold a wood carving for $30 when it hit him. If he could just make something every day and sell it for $30, he could live. Only one hitch. Not too many women want to share this $30 life. But Lisa called his bluff – “I’ll take that,” she said. “And it hit me. Wait, if there are two of us, and we each make something for $30 a day…” He shares their secret – the couple’s combined income is below the single person poverty line. And they have created a life they love out of these constraints.

Woodcarving can be blamed for Peter’s settling down in Belleville. Newly back in town, he dropped by the Quinte Arts Council, looking for a writing group. Someone noticed one of Peter’s carvings peeking out of his backpack, and before long Peter was opening a show at the QAC gallery.

After that first QAC visit, Peter wandered down to the market, where a vendor invited him to show and carve at his stall. There Peter met Lisa showing her jewellery; on her first day at the market also. Kismet! They were drawn to each other and before long, “it became very clear…he’s finishing my sentences!” A new peaceful life had begun.

The couple started thinking about where to go next. When they realized that there was so much that they could stir up in Belleville, they decided to stay. “There was this thing and we showed up,” describes their approach. So many events happen for free in a community – gallery openings, New Year’s levees, downtown events. All are places to go, start conversations, begin to make things happen.

Not satisfied with just writing plays, Peter looked for ways to foster local playwriting, and involve new audiences, with projects aided by grants from the Belleville Community Arts and Culture fund.

In 2017, Peter and Rick Zimmerman created The River and Main Theatre Company, a small, professional not-for-profit theatre company. Contributions from a handful of sponsors covered costs. River and Main productions have appeared on local stages at Belleville’s CORE Centre, Pinnacle Playhouse, Quinte West’s acclaimed Old Church Theatre (OCT), and Belleville Club, as well as Theatre in Back on Front at the couple’s 2017 downtown pop-up gallery.

Peter launched The Quinte Playwriting Collective in 2015 to promote and encourage writing for the stage. Creative contagion ensued. Plays by Collective members were soon appearing at the Sharpen the Acts original one-act play festivals at OCT, and other local stages. The Collective’s coaching role is evident in online calls to actors, directors, and theatre lovers to get involved.

Peter believes playwriting is collaborative work shared by writer, producer, director, actors. Peter, modest as always, admits he just writes the words. Within the Collective, playwrights get a chance to hear from actors – and audiences – as their play is in development.

What could be more encouraging to a playwright submitting a script than this notice on the Sharpen the Acts Facebook site: “Not finished? No worries. Send us what you’ve got. If your play is selected, we’ll help you with that.” Live reading workshops and one-on-one coaching with a dramaturge follow, before opening night.

No small wonder the Quinte area is becoming known for its playwriting prowess.

The Collective also aims to encourage people who’ve never acted to give it a try, and to open up new audiences. Last year the stage adaptation of Orland French’s First World War drama, Letters to Vimy, produced by River and Main at the CORE Centre, debuted two high-school students with impressive performances as young soldiers. These two will act again.

Peter is not alone in this. Lisa was bitten by the theatre bug at the 2016 EODL One-Act Play Festival in Perth, with the Belleville Theatre Guild production of This Side or the Other. She won an award for costume design and shared honours for Best Visual Production. She loves to play dress-up, and knows she’s found her place in the world of theatre.

Since then Lisa has directed several plays, overcoming nerves to challenge herself. In December she will make her directorial debut at Pinnacle Playhouse in the full-length play Cliffhanger.

Peter and Lisa are great believers in the power of art to transform lives, to lift people out of homelessness, domestic violence, mental illness, and addiction. Art is egalitarian, not just for an elite. Many of their community projects are geared to artists who can’t afford to put together a show given the costs of materials, framing, and entry fees.

The couple has been active in the creation of the International Women’s Day art show, Downtown Students’ art show, and These Walls are Yours show, which is open to anyone. All demonstrate a belief in the power of art and art conversation.

And the conversation continues. For Peter, another play, another stage. For Lisa, the challenge of new media, fresh projects.

Peter and Lisa’s arts activism will continue, also. It’s their response to many challenges. Downtown revitalization? The solution: be downtown, talk to people, find out about things, and get involved, share in the creative process. Need more theatre? Write, produce, act, attend.

Just start by showing up.