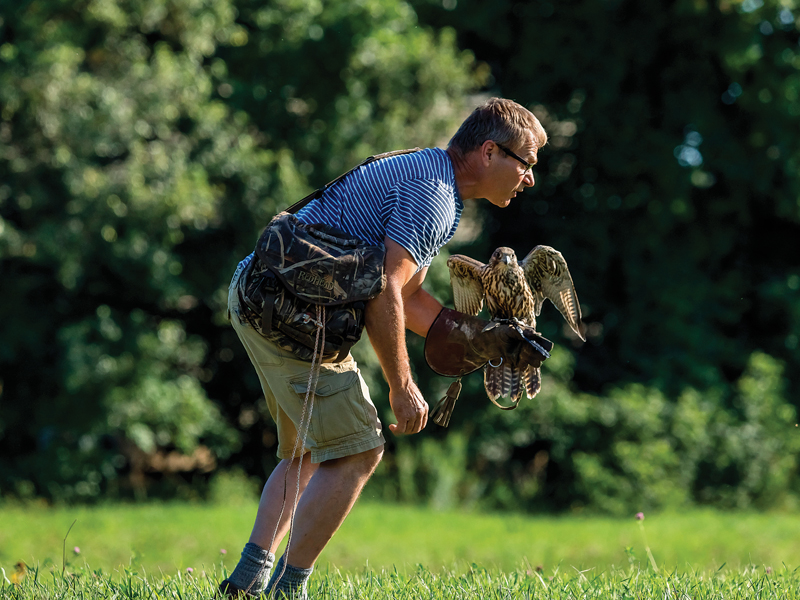 Dave and Thor
Honouring the ancient art of falconry

A tour of the acreage Dave Ascott shares with his wife Marie-Anne just north of Madoc starts with Lee, a magnificent bald eagle he acquired 14 years ago from the University of Saskatchewan. Lee was deemed unfit to return to the wild because of a broken shoulder.

Lee quickly adapted and went to work at 8 Wing/CFB Trenton keeping the runways clear of unwanted geese and other birds, which were potentially dangerous to airplanes, particularly during take off and landing.  “Lee didn’t even necessarily need to hunt the birds at the base. Just being on her perch at the tower was enough to scare the geese away,” explains Dave.

Retired now, Lee looks down on us from her perch about three metres high in her spacious enclosure, impatient because Dave is talking instead of giving her the 350 grams of raw chicken breast she gets daily, increased in the winter. To eat she shreds the raw meat with her razor-sharp beak. She doesn’t like fish, he says. “Why would she eat fish when she can get chicken?”

After many years of working with birds of prey, Dave has become known as a local expert; he’s the one people call if they have a question or have found an injured bird.

The tour continues down the hill to where the other birds are sheltered. Dave walks quickly with the sure-footedness of someone used to walking in the bush and the back-40 hay fields. As he walks, he talks, making it emphatically clear these birds are not pets. “Falconry is the hunting of birds, not the keeping of birds,” he says. There is a strong connection, despite the clarification. As we visit each bird, all housed separately except for the breeding pair, Dave has calming words, talking to all of them, verbalizing his perceptions of what they are thinking based on his knowledge of their body language and expressions, just like a person might do with a familiar dog or horse. The birds include the relatively personable Sarah, a Harris Hawk; Malcolm and Jess, a breeding pair of Gyr Sakers; 16-month-old Hazel, and lastly, Hazel’s brother Thor, a three-month-old tri-bred falcon, Gyr Saker peregrine, who is about to go flying today.

First Thor hops on the perch to get ready, while Dave explains more about this ancient avian art.

Falconry is defined as the practice of humans using birds of prey for hunting wild animals. As I watch Dave get Thor ready it occurs to me, I’m watching falconry practices – except for the addition of some modern tracking technology – that haven’t changed much in thousands of years. There is evidence of falconry dating back to 2000 BC, in Mesopotamia (modern day Kuwait, most of Iraq, eastern parts of Syria, southeastern Turkey, regions along the Turkish-Syrian border, and regions along the Iran-Iraq borders). There is even older petroglyph evidence Indigenous peoples from what became the Mongolian Empire engaged in falconry dating back to the bronze age, about 2500 BC. It was likely introduced to Europe from the East around 400 AD. Falconry wasn’t practiced by Indigenous cultures of North America – except for maybe the Aztecs of central Mexico – only making its way to North America with the colonizers in the early 20th century. With all of this in mind, I watch as Dave explains in detail the process of weighing Thor, attaching the soft leather leg straps (or jesses) used to attach him to his leash, along with bells, and an electronic tracking device to lessen the chance of losing him.

I’m also watching Thor watching me with his piercing dark eyes. Sure enough, the young bird gets bored sitting on his perch waiting, and with little warning leaps onto my head. Briefly my life flashed before my eyes thinking of the powerful talons and beak sharp enough to tear through raw flesh, but Dave just laughed and motioned to Thor to get back on his perch. “He does that to me all the time,” he says.

At last Thor is ready, and Dave carries him out, perched on his arm, up the hill past Lee and lets him go at the edge of a recently cut hay field. Dave is a bit concerned as Thor went missing just last week, but off he flies across the field into the surrounding trees. The watching from the ground begins. “Uh oh, he’s looking at Marie-Anne’s chickens,” says Dave. “He knows he’s not supposed to bother them.”

The birds are now primarily a hobby, but for a time Dave also ran a rescue and rehabilitation centre for injured birds. Much of this work involved well-meaning people trying to save young birds. “When I was doing wildlife rehab people would call saying they had a baby bird they’ve ‘rescued’ because it wasn’t in its nest and couldn’t fly. I would tell them it’s very important you leave it alone because its parents are looking after it. Also, if you take it away from that environment, it won’t know how to look after its own young.” As a rule, it’s best to leave them where they are, he says, although one of his more dramatic rescues was an exception.

In June 2015, kayakers found a young peregrine falcon swimming in Mazinaw Lake near the base of Bon Echo Park’s famous rock cliff. “It had fallen off the cliff a hundred and some feet into the water. It was still in down, they thought it had broken its neck. By the time I got there I took one look at the chick, felt it, and told them it had hypothermia. I stuck it in my truck, and I cranked the heater as high as I could and put the bird on the floor with the hot air blowing on it. By the time I got home, about 45 minutes from Bon Echo Park, it could lift its head. It was also starving to death because it hadn’t been fed now in probably six to eight hours and had burned up a lot of calories just trying to stay alive. About two hours later it was standing up and eventually made a full recovery.”

A little less than a month later, after some flying and hunting practice, Dave took the peregrine back and with the help of park staff released it on Bon Echo rock just above its nest.  Dave recalls pausing to watch as it flew around with the other peregrines. “Peregrines are fairly social, and I knew if they recognized it as their own chick, they would foster it.”

Because of a bureaucratic licensing process and lack of financial support, often meaning out of pocket expenses, Dave no longer runs the bird rescue sanctuary. Although he can still do fostering, he now mostly refers people to Sandy Pines Wildlife Centre in Napanee.

To call Thor back, Dave uses a specially designed lure, basically a flat leather pillow about 10 centimetres across, attached to a rope. He swings it in large circles around his head and notes the bird can see it from three miles away. It works. Thor comes soaring back from his perch high in the trees across the field. Meanwhile, Dave places a small piece of meat on top of the lure and Thor snatches it up. He explains, while the bird is grabbing this meat, the falconer simultaneously would grab whatever prey the bird has caught and put it in their carrying bag. “This was the schooling of kings. You take a little piece of meat and trade it for the duck or rabbit or whatever else it brings back. He thinks he got the better part of the bargain because in order to eat the rabbit or the duck they have to pluck it and break into it. They are tired because they’ve just been chasing it and you’ve got this little piece of meat ready for them to eat.”

Thor eats his prize and Dave lets him fly off again. This time he flies in the other direction around the yard and over the house eventually landing in the trees surrounding another hayfield to the south. Not so hungry now, it could take a little longer to get him back. Again, some concern sets in as we walk around the house to look for him.

Dave says often people have the wrong idea about what falconry is. “You go out, let the bird go, then you watch what the bird does. He has his own ideas about what he wants to do. It is birdwatching at a new level because you’re so involved in it.”

In Ontario falconry is regulated by the Ministry of Natural Resources and Forestry. A general falconry licence requires a small game hunting licence and completion of the Ontario Hawking Club apprenticeship program. Qualified to mentor others, a Brighton couple has asked Dave if they can apprentice with him this year. There are about 120 licensed falconers in Ontario.

Eventually Dave spots Thor and gets him down with the lure, but the recalcitrant falcon doesn’t look very happy. “He’s a teenager. He wants to think he’s smarter than I am and see what he can get away with.”

Finally Thor is back inside, weighed again, the gear removed, and he’s returned to his shelter for the night. We parted, leaving Dave to walk back out to the hayfield in the fading light of the day to look for the lure he lost in the process – thankfully not part of the tour – and harking back to a comment he made earlier about falconry being, “good exercise.”