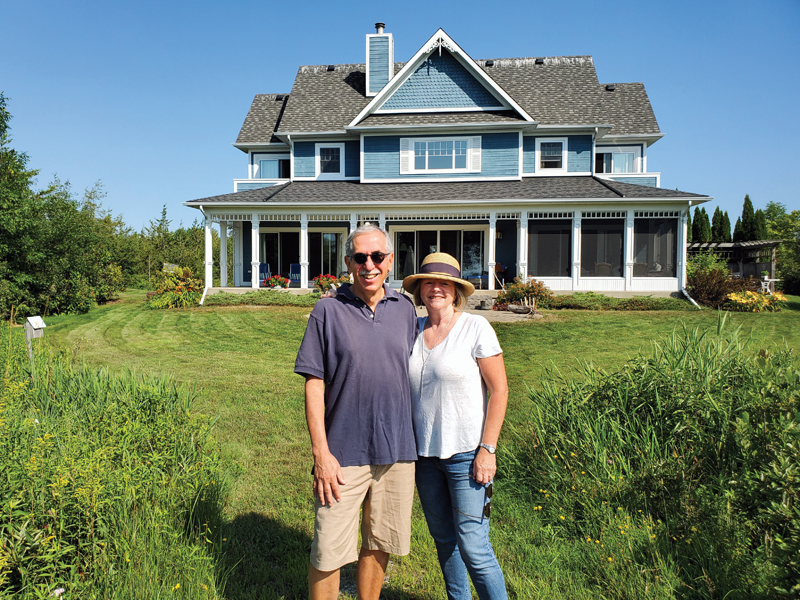 I thought the transition would never come, the farewell to winterish spring and hello to summer. Our summer, no matter how fleeting, is our mellow time. Nothing quite says summer as much as the garden party, pink pants, broad brimmed hat, and gin and tonics.

I know the threshold has been crossed when JoAnn Breitman and her husband Alan Bernstein invite Joanie and me for dinner at their Hamptons-in-the-County residence deep in South Maryburgh. There is that expression about not living in the County unless living in le comté profond, in other words the deep County, which some have defined as south of County Road 1. The Breitman/Bernstein property is le comté très profond. We drive south on Brewers Road, and then south again on Duetta, named after the famed rum-runner, Len Duetta, who ran these roads in the 1930s. Just before the road runs out at the lake, we come upon a large elegant blue-clad house right out of Long Island. Tall, bold, and classic, it is somewhat of an architectural shock to see such a fine build in so remote a place. Doc Alan, looking relaxed in grey shorts and matching golf shirt, and JoAnn in a white blouse over designer jeans, lead us warm and welcoming through the high-ceilinged principal rooms to the courtyard facing the vast expanse of Lake Ontario.

Alan is the President and CEO of the Toronto-based Canadian Institute for Advanced Research (CIFAR), which creates global research networks working on complex areas of enquiry. Prior to CIFAR, he was the inaugural executive director of the Global HIV Vaccine Enterprise dedicated to accelerating the development of a HIV vaccine. Today he looks more like a wandering bird watcher than a molecular biologist who has garnered many awards for his contributions to science.

JoAnn, a retired banker and investment wiz at BMO, and Alan share an ardour for cycling that gets them touring all parts of the County. They moved deeper into the County a few years ago from a cottage on Smith’s Bay in the Waupoos area. They hankered for a quieter and more expansive waterfront. “We like solitude without seclusion,” Alan explains as I marvel at the open horizon and endless stone beach framed by two towering black willow trees. Because of the high water in Lake Ontario, much of their lawn and meadow is waterlogged with canals of water and new marshland encroaching their garden. We sit in their screened veranda, and dazzled by the views and aerobatic displays of diving osprey and strutting white egrets, we enjoy cocktails and savoury hors d’oeuvres.

We are joined by Gerry and Don, and Hew and Deborah, all gathered for the joint celebration of two birthdays - our host Doc Alan and the artist Gerry. There is no mention of age in the commentary on horoscope and character signs. The wildlife activity so close to the house is interpreted as a zodiac omen of good fortune. Later JoAnn brings in a birthday cake to a round of applause and song. The celebrants extinguish the candles in an impressive double gust of breath. In the interest of fun, we have ignored the dictate not to bring gifts. Joanie presents Gerry with a tube of scarlet lipstick, reminding everyone of the Gwyneth Paltrow observation that, “beauty is about being comfortable in your own skin, that and kick-ass red lipstick.” Gerry promptly applies several swipes of red and puckers flirtatiously to the table. Not to be outflanked, I produce a fuchsia beret as a gift to Alan which I fit on his head, at the same time fitting a matching fuchsia beret on mine. This is met by cheers, catcalls, and demands for photos. Back in the garden for dessert, a special toast is raised to Alan in recognition of the two honorary degrees he received in June from the University of Toronto, and the University of Western Ontario. He also plays a mean cello and helped inaugurate an adult training week at the Port Milford Music School.

What is it about summer in the garden, on the trails, and on the beach? The sudden burst of warmth and growth? The County summer is framed by open water, big sky, and rural routes. Joanie and I find ourselves again on one of those dusty roads, County Road 13, also known as Long Point Road, which runs past Little Bluff Park to Point Traverse.

Andrei and Joanne Sulzenko have a tradition of hosting a Canada Day celebration in their clifftop garden and we mingle with friends and neighbours midst oversized Canadian flags, flagons of rose and County vintages and homemade sweets and hors d’oeuvres. Their property, a refashioned bungalow, sits high over Prince Edward Bay with distant views of Cape Vesey and the Waupoos headland to the north, and Timber Island to the east. Standing there on the escarpment, I am in awe of this island county, so hidden, so jewel-like, so fertile. Is it any wonder Canada is the envy of the world for our surplus gorgeous geography and water?

The day is hot, like the days before, and the grass is parched. Some guests wander to the limestone edge to catch the cooling breeze off the water and others congregate in the screened-in porch fashioned by carpenter Andrei himself. Both Andrei and Joanne hail from Ottawa where they had careers in public service, and now divide their time between the capital and their South Marysburgh bijou. Andrei, along with son Ben, are the masterminds in the kitchen, seeing to a steady flow of delicacies and sparkling wines, while Joanne, the poet and wordsmith, is the chatelaine, ensuring folks are introduced, charmed, and the just-married neighbours announced.

The final occasion of our summer garden party week is in Picton, just off Main Street, where Andrew Innes and Don Watson have reimagined a single-storey ’70s ranch house. Architect Brian Clark completely reconfigured the low-slung building into something between a loft and a hacienda, equal parts open, dramatic, and flowing. Elegant Andrew ushers us in, plants a glass of champagne in our hand, and points to the verdant garden through the glass doors. Neatly bearded and dressed in smart beige Dockers and a navy cotton shirt, he is the essence of the understated genial host ensuring guests are made to feel at home. A well known and coveted artist, Andrew swapped life on Toronto’s Bay Street as an accountant for Main Street, to pursue his first love of painting.

Don, also bearded and wearing a striped shirt over green shorts, greets us under the tulip tree, perhaps the oldest and largest in the County, with a hug and prompt to wander the garden. He points out two large stone stags that appear to be running through the greenery. “It was a mud pit for a long time,” he says. “Nobody told us the garden would be a bomb site during the reconstruction of the house.” Now, after a magical Terra Vista intervention, the space is a private oasis, bursting with mature trees, flower beds, and a flagstone patio with fountain and pond. “Andrew can’t leave a store without a plant,” he explains. Don, who had a career in teaching (“I was the first male kindergarten teacher in Toronto”) and retired as a school principal, has transitioned to acting and theatre. He is much remembered for his role of Sir in the Mt. Tabor production of The Dresser.

Catering staff in smart uniforms swirl about with bottles and cut sandwiches. The visual feast is enhanced by meandering guests in wide brimmed hats and colourful trousers. There is something about the summer garden party that outs wild clothing and accessories. Andrew and Don revel in the laughter, camaraderie, and buzz of goodwill. They love it here in the County. Andrew, a student of history, has written a fine memoir on his Innes Clan. Like other United Empire Loyalist families, he feels he belongs. “The only place we are going is over there,” he says, pointing in the direction of Glenwood Cemetery at the base of the Macaulay Mountain. “My ancestors are buried in the cemetery,” Don adds. “The Preston headstone was knocked down by vandals, but we are making it right.”