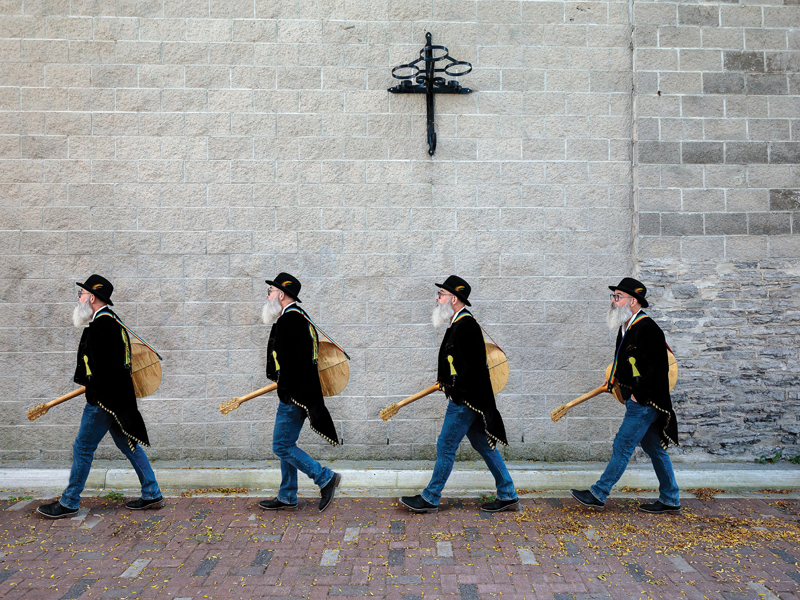 Delivering joy to young and old and in between

Like Woody Allen with Manhattan, musically mesmerizing front man Andy Forgie - a Belleville legend - has never left his hometown except to ply his trade.

“I’m an East End kid. My Mom and Dad lived four blocks away from where I live now. After high school, the road was my calling. The turning point was seeing the Beatles on the Ed Sullivan Show (February 9, 1964.) Turning nine just a week before, I remember it like Yesterday, pardon the pun. I remember the insanity in school the next day. All the kids talked about the Beatles. Boys combed their hair like the Fab Four. Girls were aquiver. It was an instantaneous explosion of joy. The band was having a good time, the audience was having a good time, everybody was smiling and ecstatic. I think I got caught up in the ball of energy.”

Andy picked up his first guitar in grade six. “I took some lessons. My albatross is I am very impatient. I just wanted to play what I was hearing on the radio, and my teacher was teaching me cowboy tunes like Down in the Valley,” he laughed. “I started getting together with two buddies from St. Joe’s. In seventh grade, we met Mark Rashotte and put the band together.” Three of the four still play together regularly on special occasions.

“Throughout elementary and high school, we had lots of opportunities to play in front of live, breathing people. We got our 10,000 hours in, so to speak. After high school, we had the big decision: what are we going to do? We decided to travel across Canada and be rock stars. We bought a used Econoline van and turned pro in Summer ’74.”

Road warriors for the next 10 and a half years, they criss-crossed Ontario and Quebec ad infinitum, with extended tours throughout the east coast, including New York State, and then west through the Rockies. When they got scouted seriously, they showcased in New York City (1979) getting close to their dream. They had a lot of names, eventually settling on Photograph, signing a one-year contract with Capital Records’ Parlophone label (the same as the Beatles) in 1980, releasing an album a year later. Photograph scored a coast-to-coast hit called Last Dance.

“We worked so hard to the point of being signed, playing cool gigs. When Capital didn’t renew, we were heart broken. Then the gigs started going backwards. We played places we thought we’d never play again. After the band broke, I just could not give it up.”

For a year he ran a daycare service from home because his wife Barb had a job at the hospital. He figured if he was to be home with two kids, he could look after some of the neighbourhood kids.

Neighbours were saying, “Hey Andy is looking after kids,” and he ended up having six kids a day, calling it Mr. Mom. “It was fun. I played for the kids, and we ate peanut butter and jelly sandwiches. I got into children’s music, In the late ’80s and early ’90s, there was a big market in school assemblies and libraries and private parties. I still do festivals and schools, touring Southern Ontario. I made some CDs of original music and got to work with the Friendly Giant. A beautiful man, a guest on one of my CDs.”

In 1999, Andy and Mark formed All You Need is Love - a celebration of the Beatles; it started as a one-off charity event for a women’s shelter. The project had legs. Twenty years later, they’re keeping their rock mojo going internationally.

This electrifying showman, not surprisingly, has bought his talent to the third demographic of the trifecta - seniors. Here is where Andy Forgie, the sweet guy, flowers.

“Of everything I’ve done, I’m most proud of the 23 years of doing musical therapy. It started by being a children’s entertainer and then a local nursing home invited me to pop over and play. The people running it had a vision. They asked me to do this weekly in the cognitive disability ward, and then another nursing home called. Now, I have six or more I do regularly. I walk into the special unit and play for people and their loved ones. I started with songs from the ’30s and ’40s. But the math of it now is, I am doing more ’60s and ’70s music because of Baby Boomers.”

The therapeutic effect is staggering.

“With memory loss, they can’t remember what they had for breakfast, but they can remember words to songs they danced to long ago. They are lethargic when I get there, and they hear the music and suddenly they are alive and singing and dancing. For a brief window in their day, they are young again. Regardless of your generation, it’s about the songs of your teens and 20s that never leave you.”

Chicken or the egg. Has Andy’s life been all about music because he is joyful, or is he joyful because he has always been about music?

“Music gives me joy. My parents loved music. We had it in the house all the time. We had a fantastic record collection. Before the Beatles, I was listening to the soundtracks of Porgy and Bess and West Side Story and singers my parents loved, like Perry Como. I would sing in my swing set. After seeing the Beatles on television, I would stand in front of my mirror strumming a badminton racket, pretending to be John spread legged or Paul knock-kneed. The first time I sang publically was in grade school class. I sang I Want to Hold your Hand, doing all the sounds with my mouth.”

“I’m proud of the things I have accomplished. I have no regrets because anything that didn’t go right in my world was not my fault,” he delivered with more laughter. “I still say when Capital Records dropped us, it was their loss.” Capital also rejected the Beatles, originally.

As if to complete a magical circle, Andy met Paul McCartney in London in 1974, during a high school trip.

“We went to a show in the Rainbow Theatre. Paul and Linda were there, so I asked him to autograph my ticket stub. He was very nice.” Andy knew he had to say something to Paul, and said, “I will never forget when you were on the Ed Sullivan Show.” There was silence and Andy thought Paul didn’t want to talk about that, because by now he was with Wings. “I thought I’d stepped in it, then Paul replied, ‘I will never forget it, either.’ Yes, the eagle has landed. We connected!”

To anyone who has ever seen Andy, he is the personification of joy.

“In a rock band, I learned how to win a crowd over, but it was playing for children where the joy kicked in. Playing for kids, seniors, or my peers, this is who I am. It is not an act. With children’s stuff, suddenly it wasn’t entertainment for entertainment sake; it became something else and morphed into musical therapy. Now it morphs when I play in a rock band because I am comfortable in my own skin. I remember my Dad talking about Al Jolson, about leaving it all on stage, as in You Ain’ t Seen Nothin’ yet.’”

Exuding honest enthusiasm is effortless to Andy. It’s who he is, whether he is sitting with an interviewer or performing British Invasion songs on stage at Westben. He is so comfortable, equally happy playing music or telling a story. He wears kindness on his sleeve and is joy itself.

“What appeals to me when performing for kids, is their reaction, uninhibited, innocent. I realized I didn’t have to talk to just kids. I could say things to other age groups. Same on the other side of the rainbow, with folks in seniors’ homes. It’s pure. When we’re young, we’re fearless. We will do almost anything and not think about it, just do. Older, you get more disciplined and self conscious. Suddenly, you cross the bridge again and you go, ‘Yeah I can do this.’”

Andy draws his heroes into a thoughtful moment.

“There is something truly wonderful inside the Beatles’ music, how all the notes fall together. I’m so happy growing up when it was happening.”

Andy Forgie’s magnetism stems from having reached a place not everyone can claim - embracing oneself.

“This is who I am. To me, music is a gift, what I’m supposed to do. Music is always with me. I wouldn’t have known what else to do. I go from an intimate setting playing for kids or seniors to a full rock-out band. I love it all.”

As for aging gracefully, “I guess age evens all things out. Age is a wonderful thing. When you’ re young, there is competition. You put more pressure on yourself. Today, there is no pressure. I really am comfortable in my own home. I don’t want a whole lot of stuff. I would never give up the musical therapy. It is the one thing that makes me feel I am leaving my mark. I just want to stay reasonably healthy to enjoy my grandchildren and perform my music.”

“I reached a point when I realized I like me, who I am, and what I do. I like my life.”