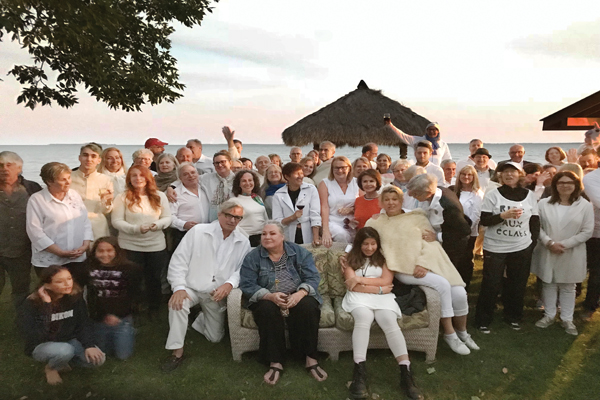 The invitation said, “please wear white.” The occasion was the First Annual Farewell Party hosted by the owner Judith van Bastelaar and her son Xander. Judith has decided it is time to sell the property known as The Beach Waupoos and move on to new adventures.

The weather in late September is not reliable for a summer fête but Judith and Xander do not pay attention to fashion protocol. It is part of the daring spirit in Marysburgh, sometimes referred to as the independent Duchy of Waupoos.

Joanie and I drive down a long twisty lane through an old-world forest on a cold Saturday night. The weather has turned dramatically from the summer balm of the night before. Privacy and remoteness are part of the appeal of this part of the world. As are quiet and a stillness of nature. When the beach house, thatched roof hut, and expanse of sand first come into view, it is like a mirage out of a Caribbean travelogue. A full moon over the lake provides a pathway of light.

If there is a formula for a rocking party, this soirée has it all. An otherworldly setting, a night sky, and lake horizon without end, the camaraderie of old and new friends, endless fine vintages and comfort nosh, and a rattling live band on a hard dance floor.

Xander was the first at the microphone, welcoming the revellers and toasting brave Judith. He is 19, tall and handsome in a high collar white Nehru jacket over white pants. After attending Lakefield College School, he is doing a gap year in Europe before undertaking an environmental technologies program at King’s College in Halifax.

“It is not easy to throw a big party on your own. We haven’t had one since my father Joseph died six years ago, but my courageous Mum was determined.” He pauses, “It’s also her birthday.” The announcement surprises most of the guests, who break into applause.

“It’s all about sharing and connecting with people,” Judith adds from his side. “Xander and I are a team. Please enjoy,” Judith says, gesturing to the 18-foot teak table groaning with platters and bottles tucked under the canopied kitchen. “But first, a photo.”

Guests appear from all over the property, emerging from the beach house, from the stone benches around the open pit fire, and from the tiki huts at the water’s edge. Out of the darkness over a hundred family and friends are herded into a group with the beach as background.

The ‘white’ on the invitation is more about the group photo, a jigsaw of white and cream in salute and adieu to The Beach Waupoos. There in the front row sits Judith in a stunning white furry poncho over Magpie white jeans. Judith and Xander – two shimmering stars in the evening galaxy surrounded by their community. Neighbours Howard Goldberg and Cath Collins have been appointed chief photographers for the evening snapping the group and many more photos on their smart phones. As if on cue, three white swans drift by in the open water.

Lest anyone get too sentimental, Judith assured us, “It will probably take years to sell the property.” Hence the ‘First Annual.’ “There will be another farewell next fall,” she promises.

The Robinson family on Judith’s side has been in the ’hood for a long time. Since she was five years old Judith, a graduate of Trent University, has spent summers at her grandmother’s home at the eastern reach of PEC. In the late 1990s the property next to her grandmother’s old home suddenly came on the market. She and Joseph jumped at the chance.

He was Dutch from Rotterdam, and in the gold exploration business. That was the beginning of the project now known as The Beach Waupoos. Her brother Raeburn oversaw the building of the driveshed/residence with 22-foot ceilings, and her sisters Sally and Jennifer, Andrea, and Betty were always about giving counsel. Mother Robinson, who lives in a log cabin at the road, could always be counted on for tea and solace.

A disco ball strung in a tree next to the dance floor begins to rotate throwing out shards of light. Paul Rollinson, the husband of sister Sally, who has a cottage on nearby Waupoos Island, is playing both chef and bartender. He fills our glasses with Del Gatto Pinot Grigio. “Better get out there,” he says as David Hatch and his band begin to play. “Gotta move to stay warm.”

David is a versatile performer. He and his wife Stacey have a production company called WhistleStop which hosts and produces a national magazine television show Motorcycle Experience. They have just opened a New York style gallery dedicated to abstract art in Bloomfield. David is also addicted to guitars, a virtuosity he is demonstrating at the mic. His band, Pushbroom Tycoons, plays good old classic rock and southern country boogie. They once opened for April Wine.

As Hatch belts out a Kingsmen cover, Louie, Louie, Joanie and I take a spin on the dance floor before resting on a bench beside two figures swaddled in blankets and mittens. Bobbi Dahiman and David Mott emerge from under the wool. “I feel like we are on the deck of the Queen Mary,” Bobbi jokes. They live next door in a futuristic all glass house that is well known to travellers on County Road 8.

Judith and Xander are accessible hosts, weaving in and out of the celebrants, dispensing chat, counsel, gossip, and bonhomie. Good karma is everywhere. Brian Ford rarely leaves the dance floor, Gerry Jenkison tries to control her alpha dog Boots, and Russ Walker is full of flying stories. Fraternal twins John de la Roche and Frank, in his signature long shorts, point to where they are both building modular homes on the shore. Bob Cowan and Stacey Hatch pull me back to the dance floor as a rendition of the Stones Satisfaction begins.

Well before midnight, when the pace is mellowing, and folks are warming in the glow of the fire pit, Joanie and I slip off to make the journey home to Glenora. In the distance Sherry Karlo and her fiancé, Saxe Brickenden are doing a karaoke version of Mustang Sally. On the way out via the inland marsh, sister Jennifer is squeezing fresh apples in an antique crusher. “Cider for the road.” She hands us a paper cup. “Judith wants everyone to go home with a taste of Waupoos.”

When the final farewell does come, The Beach Waupoos will remain close by. Judith and Xander have sectioned off waterfront acreage to the west below the tennis court to build something modern. Smaller, more modest, but with a view of the retreat next door.